Watching some of the TV shows on subsistence living in Alaska renewed my interest in gill nets.

There is not a lot of information on the internet, primarily because gill netting is illegal for most people in most of the Lower 48.

The following information was collected on some lakes in Minnesota, primarily in the fertile, southern part of the state. 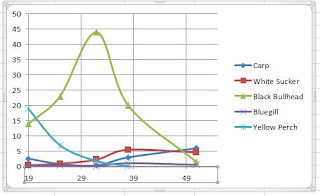 Lower axis is mesh size in mm.  Curves are number of fish caught in each mesh size (CPUE).  I chose non-game fish or the most abundant, small game fish of the ones reported.  As you can see, from a numbers standpoint bullheads are a great way to go.  That may be due to the fact that bullheads are the last species to die of oxygen deprivation.  Oxygen deprivation occurs in small, shallow ponds that become snow covered.  The vegetation dies and starts to decay which gobbles up all of the dissolved oxygen.

One problem with this data is that a perch caught in a 19mm (3/4") mesh trap is about the size of a toothpick.  What would the data look like if it were adjusted for fish weight? 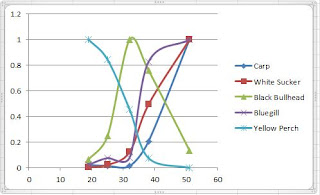 Weights were normalized within each species.

51mm (2") mesh, monofilament caught the greatest mass of carp, white suckers and bluegills.  The 38mm (1-1/2") mesh caught about 80% as much mass in bluegills as the 51mm mesh and might be a good compromise if you were targeting both bullheads and bluegills.

The greatest mass of yellow perch were caught with the 19mm mesh nets.

There is more information that can be extracted from the graph.  For instance, the mass for both suckers and carp are still rising rapidly at the 51mm mesh with the carp rising faster.  That indicates that even more mass of carp and suckers would have been caught if mesh sizes larger than 51mm had been tested.

The mass for bluegills, on the other hand, shows very little gain from 38mm to 51mm suggesting that the optimum is somewhere in that region.

Summary:
If the only fish in your ponds are bullheads, you cannot go wrong with a 32mm or 38mm mesh monofilament gill net.

If the water you are fishing has significant numbers of suckers and carp, then you cannot go wrong with a 51mm mesh, monofilament supplemented with a 32mm or 38mm net for bullheads.

As always, you are responsible for complying with your local laws.
Posted by Eaton Rapids Joe at 5:25 PM