A weekend of culture

We had a pleasant and uneventful weekend.

Yesterday we went over to Mom and Dad's to rake leaves.  It is a family event.  Dad can't quite keep up with the yard work any more.  The fact that he had his 92nd birthday last week might have something to do with it.  Danged party animal.  Still recovering.

He had a recent bout with low blood iron.  The most likely cause appears to be that tiny aspirin tablet he took every day.  Even though it was enteric coated it still allowed small intestinal bleeds to whittle down this iron reserves.

After raking, Mrs ERJ and I went to Grand Rapids.  Belladonna wanted to subject us to culture.  I think she wanted to hang out with us because her left shoulder is sore.  She thinks she has a slight tear in her upper pectoralis major...probably from dwarf throwing.

For whatever reason enormous numbers of dwarfs converged on the front steps of her townhouse on Tuesday night and she had a tremendous workout.  She thinks she might have over done things.

The first museum we went to was The Grand Rapids Museum of Proctological Sciences.  Surprisingly, this is one of the very few museums of its type in the country.  In the end it did not appeal to my sense of taste.

Then we went to the Grand Rapids Art Museum which was, frankly, easier on the eyes and nose.  Every work of art had the admonition "Do not Touch!".  None of the exhibits at the GRMPS had those kinds of signs.

Mrs ERJ even got in trouble when she attempted to get the mobile that hung from the ceiling to move by blowing on it.  Perhaps it would have been less obvious if she had bothered to extinguish the cigar she was smoking at the time. 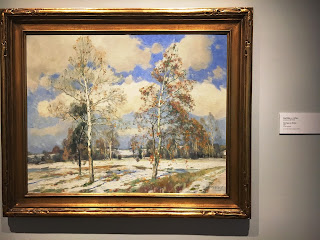 It caused Belladonna boundless mirth when this picture caused me distress.

It was painted by Mathias Alten and is titled "Birches in Winter".  Presumably it was painted a year before his death.

The thing I find bothersome is that the trees are very clearly American Sycamores, a tree that is very, very different than a birch.

I suspect they found the canvas when they were cleaning out his studio after his death.  Some low-level clerk at the auction house saw white bark and said "birch" catalogued it as such and the deed was done.

Otherwise, I find the art of Mathias Alten to be to my taste.  Big color.  Minimal fussy detail.  Solid composition.  Realistic looking people and animals.