Team T vs Team S: How might it play out? 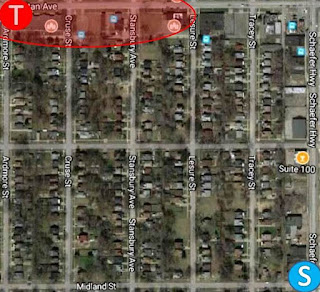 This is a classic case of game theory and almost identical to The Prisoner's Dilemma.  Consider the individual actor on Team T.  The actions of the other fifteen team-mates are not under his control.  Those actions are environment.

If the other fifteen go out to eradicate Team S and he joins them he might get killed.  If he loots then he gets to skim all of the best merchandise.  Therefore it is very much to loot even if the other fifteen choose to execute the primary mission first.

Every other actor is thinking the same way.  Loot first.  Primary mission afterward.  Loot most lucrative targets first because they will eventually run into Team S and start fighting.

Team S's response depends on how much intelligence they have.  If, for instance, they knew there was a jewelry store, a pawn shop or a party store within sight of the Team T drop-off then their job is easier.  Let's suppose they don't have that kind of intelligence. 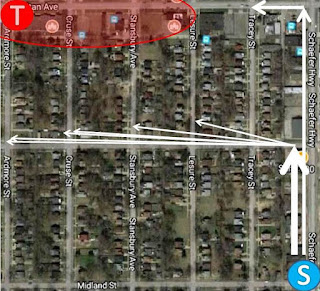 Team S bails out of their bus and grabs their gear.  Some of it they sling into the bushes for later retrieval.  They carry the rest of their gear with them.

They move quickly and silently to blocking positions shown by the white arrows.  Remember, it is midnight and most Team T are likely to have lights on their pimped-out AKs.  Their locations should be easy to pinpoint given Team T's lack of sound and light discipline.

Optimum firing distance is probably 50-to-100 yards.  The exact location would depend on cover and having a clean exit route.

The Team S members who went furthest west have the potential to separate Team T from their supplies because they probably lacked the discipline to carry them very far, or cache them effectively.  Fear of being cheated out of the loot ensures that nobody stayed behind to guard the supplies.

If Team S is able to purloin the supplies then Team T needs to start fires to warm themselves.  This neighborhood is in west Detroit and it is cold in early December.  Carbon monoxide might get some of them.  Structural fires might get some.  Movement to get fuel exposes them to  Team S sniping.

Posted by Eaton Rapids Joe at 2:00 AM