Mrs ERJ and I drove Southern Belle and Handsome Hombre to the Detroit Airport on Sunday.

We left at two in the afternoon and it was a clear, sunny day.  Usually, it seems like trips to the airport are in the dark or when it is snowing.  But not today.  It was a beautiful, seventy-five mile drive with no drama.

There is a town that is about fifty miles from Eaton Rapids that one must pass through on the way to the airport.  There is a university in that town.  Like most universities, it attracts idealists, seekers, free-thinkers and folks seeking alternative ways of doing things.  That could be code for saying that there are large numbers of able-bodied, unemployed young people in the vicinity. 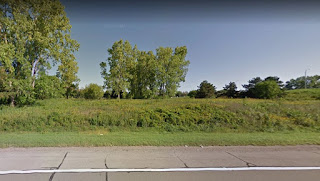 As noted earlier in this post, it was a sunny day.  The sun lit up the leaves of the Pyrus calleryanna.  P. calleryanna is almost an evergreen; the leaves turn purply-red-green and hang on late into the fall.  The entire cloverleaf was sprinkled with two and three foot tall P. calleryanna seedlings.  As were the cloverleaves immediately to the east and west.

This should not be a surprise.  P. calleryanna is now considered an invasive alien.  This town has clement weather and much of the commercial landscaping made prodigious use of P. calleryanna.

Ironically, P. calleryanna is a decent rootstock for edible pears.  And therein lies an opportunity.

The modest proposal
The guerrilla gardener in me sees this as an opportunity.

I read some of the articles at the "Resilience" websites and a common theme is local food production.  Another common theme are calls to increase "commons" and to redistribute property.  A third theme is the "growing" of skills.

I know that some of the authors of Resilience type essays are not well versed in the Bible, but it is well for them to bear in mind that it forms the bedrock of our shared values in the country.  Consequently, even if you are not a believer it behooves one to know a little bit about it if you seek to convince others.

One of the stories in the Bible involves three stewards who given "talents" to manage while their master was away.  Two of the stewards invested well and increased their master's wealth.  The third steward buried his opportunity and did nothing.  The moral of the story is that much is expected from those to whom much has been given...AND...opportunities lost will cost the actor who could have benefited if only they had the sand to do it.

It begs the question:  "What are idealists doing with the common property that is already available to them?"  There is no better sales pitch than to be able to point at a finished project.

As a guerrilla gardener I look at this $1.5 million piece of property.  It is not protected by traditional, one-owner property rights.  It is close to all of those underemployed idealists.  God already planted hundreds of pear rootstock on the property.  If pears will grow there then so will apples and many other fruit trees.

A few:
If it is such a great idea, why has it not been done?
Maybe because "common property" is not a great idea.  It has been tried and found wanting in many places.

Perhaps because of bureaucratic territorialism.  Many bureaucrats are loath to give up control, even if it costs them nothing.  Some of them see projects like this as a way to increase their reach and budget.

Perhaps doing never occurred to the idealists holding down seats at the local brew-pubs.  The idea of doing without meetings and planning and consensus is not a part of their universe.

Maybe it is a simple lack of basic knowledge.  Maybe they cannot identify three foot tall P. calleryanna seedlings while driving 80 miles an hour down I-94.  Boggles the mind but there might be people who cannot do that.

For my part, I will gladly donate scionwood and time if anybody wanted to graft some of those seedlings next April.  Just leave a comment with contact information and we can get the ball rolling.  This is a quiet "Put-up or shut-up" challenge.  Idealists leaving comments will validate that their values are in alignment with their published desires.  Not capitalizing on the offer suggests that the idealists have other motives, be it territorialism, status, budget or a strong distaste for physical labor.