Working in the shipping department

Yesterday I was introduced to the packing and shipping line.
I was instructed in how to do the job by a woman with more than the usual quota of arms. 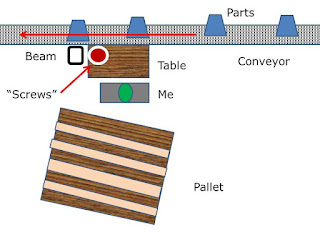 This is the basic job layout.  Parts move on a conveyor from right-to-left at about one foot a second.  Parts show up at a rate of ten a minute.  My job was to reach inside the white-and-red circle for a screw, install it on the part and then put the finished goods in boxes or crates that were on the pallet behind me.

I thought I was doing pretty good.

And then...
The woman with the twenty-four, four foot long arms went to lunch.

She had been doing her job and part of mine.  She kept re-arranging the boxes on the pallet so I had a short, unobstructed "load".

I was almost keeping up except some of the boxes had flaps that I had to fight with.

I was slowly slipping downline.

What killed me was when I was working on a part that was in the position of the left most piece shown in the illustration.  I was working over the top of my  screw container and the part was partially obstructed by the rectangular beam shown in black-and-white.

I yanked that puppy off the line to load on the pallet and sent the container of screws flying.

DOWN onto the floor.  Down beneath the pallet.

Due to coating considerations these screws are not usable if they touch the floor.  They needed to be reconditioned.  There were  no more screws on the line.

The boss took it well.  I think he expected something to happen because he knows that the woman with the twenty-four arms is a rock-star.  In his shoes I would ask the rock-star if the new "klutz" was worth keeping around or should he be sent back to the minor leagues.
Posted by Eaton Rapids Joe at 7:38 AM