A man backed his truck into the family garage.  He had some very large boxes in the back.

He got out of the vehicle and walked into the house.

"Wow!  That is AWESOME.  How are we going to do that?" his wife asked.

"Easy, I bought a new washing machine, dryer and dishwasher." he replied.

"It is math, my dear, and I know that is hard for you." he said condescendingly.  "The average working woman spends 900 hours a year doing housework.  Your time costs your employer $65 an hour.  These modern appliances should cut the time you spend on housework in half.  Four-hundred, fifty hours times $65/hour is about $30,000." 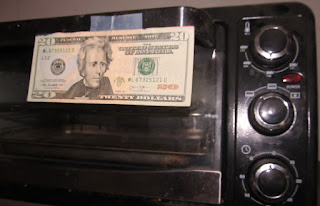 The manager of a factory that assembled appliances had a new summer intern.  The intern arrived a week before his summer project kicked off so the plant manager had to find him some busy work.

"Go to the Suggestions Department and pull the file on every project that was approved in the last two years.  I want you to add up the savings on a per-unit basis." he said.  The plant had an extremely strict "One Year Payback" threshold for accepting suggestions.  The Plant Manager's gut feel was that they were accepting, and paying for, too many suggestions.

The intern went to the Suggestions Department and totted up the cost savings.

Base on the cost savings "vetted" by the Suggestions Department in the last two years, the factory could tape a $20 bill to each appliance and give it away...and still be the most profitable "center" in the corporation.

As it was, the appliances were priced in the upper end of the market and the factory was barely profitable.

What happened?
The Plant Manager attributed it to increased productivity in non-bottleneck processes.  Speeding up a process that is not the metronome that paces the system adds no incremental throughput.

The labor freed up by speeding up non-bottleneck processes is very difficult to reallocate. How do you monetize 20 second slivers of time?

Urban Legend?
The owner of a small business walked around his operation first thing in the morning and chatted with each employee the Friday before the Labor Day weekend.

The weather was projected to be perfect.

He told each person the same thing.  "I am not going to hold you here for the full eight hours.  Do your work.  Do it well.  Be ready to hit the ground running on Tuesday.  Enjoy your weekend."

The operation was a ghost town by 1:30 in the afternoon.

On Tuesday, the business owner pink-slipped the bottom 20% of his work-force.

When asked why he responded, "Everybody got their job done in less than six hours.  That means I have too many people."

He was challenged, "What happens when something unexpected happens?"

He replied, "I only cut 20% when I could have easily justified 25%.  And frankly, I am releasing the under-performers.  I expect the remaining people will have no problems handling the load."

"The other thing is that being able to "clear the decks" at the end of every shift is more about our comfort zone than about the customer's.  Our customers make their purchases expecting delivery in thirty days.  Considering the amount of money I was pissing away, we can tolerate being back-ordered a few times a year.  It will be absolutely invisible to the customer."