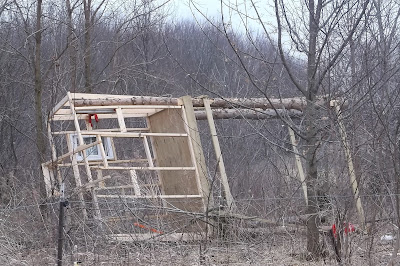 We had high winds last Friday.  Another mid-Western blogger wrote about it HERE.  We had sustained winds of 40 miles per hour.  Who knows what the gusts were...maybe 65 mph.

I had very carefully poured an anchor on the windward side of the blind, fully intending to lag-bolt it to the leg.  Obviously, it did not happen.

Now, there is nothing to do but set things right.  Literally.

The first couple of tasks involve squaring up the structure while it is still on the ground.  Then a bunch of diagonal bracing needs to be installed to ensure it will withstand the rigors of tipping it back upright.
I used to work with a gentleman named Dino.  Dino's dad was a rigger on the railroad.  Dino regaled me with stories of his dad (and a crew) lifting, moving and setting upright steam locomotives that had derailed.  They used little more than wedges, railroad ties for cribbing and sledgehammers.

Flipping a 500 pound deer blind ought to be a piece of cake.

And then I will definitely bolt the anchor to the leg of the stand.  I don't want to do this again.
Posted by Eaton Rapids Joe at 9:24 PM