If you have ever hunted birds or rabbits with a dog you know that there are three profoundly different ways to go about it.

The best way is when the hunter views his dog as a teammate.  There are some things the dog can do that you cannot do.  For example, you cannot smell birds from 40 yards away, nor is it likely that you can run 30 miles on a warm afternoon.  Your dog, on the other hand, cannot drive nor can he legally carry a firearm.  You may be partners but you are not equal partners...you are complementary partners.  These dogs are a joy to watch in the field.  They hunt.

Another way is to view your dog as a mindless robot.  You become frustrated when he shows no interest in hunting "cover".  You are too obtuse to realize that your dog knew, before you were halfway across the field that there were no birds in those old Giant Ragweed stalks.  Your dog, bred and trained to hunt, becomes frustrated.  You clearly don't want to hunt otherwise you would not be wasting time where there were no birds.  These dogs don't hunt, they sulk or bite...they frustrate because they, themselves, are frustrated.

The flip side is the owner who abdicates all responsibility.  The hunter who views his dog as a teammate guides his dog, often with subtle body language that is nearly imperceptible.  The abdicator throws all the responsibility on his dog's shoulders.  These are the dogs that run away and get hit by cars.  These dogs don't hunt, they go feral.

Back to the Arboretum


I finally made it to the administrative office.

I had to drive by a Children's garden.  It was closed for the season.

To the west was a large sculpture garden.

I got lucky and caught Brett Meyers, the director, in his office and we had a nice chat.

He filled me in on some of the Arboretum's initiatives. 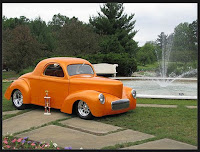 I commented on the scope of the activities and asked how that came about.

He attributed it to the Arboretum's Board of Directors.  He said that they have an expansive, inclusive view of the community they serve.  They want to expand their presence in the community so more people have a sense of ownership in the Arboretum.

I think he is modest


I interacted with several volunteers and staff:  Everyone was a dog that could hunt.

For example:  I ran into the groundsperson before I left.  I mentioned that I had a couple of questions about a few of the specimens.  Of course, identifying exactly which specimens can be a challenge when you have 85 acres of planting.

She said, "Let's go look." even though it was a half mile from the office.

After addressing my concerns, she said, "Earlier today you asked me if there was anything that I was particularly proud of, something that was a 'must see'.  Since we are out here, there is something I want to show you."

And then she showed me three Lacebark Pine  (Pinus bungeana) trees that she had planted in 1993.  I think she figured out that I am into edible landscaping and Lacebark Pine is one of the nut pines.

I think Brett is working with a great Board of Directors and a fantastic bunch of staff and volunteers.  I also think he knows how to hunt with dogs.
Posted by Eaton Rapids Joe at 4:12 PM