I planted three more trees in the windbreak.  There are Black Walnut trees in this part of the yard so I switched to native species as they are likely to have more resistance to the juglone secreted by the walnut's roots.

I planted Nuttall Oak (Quercus nuttallii/texana).  This species is currently something of a darling among the landscaping and Quality Deer Management folks.

The plant is beautiful, fast growing, cheerfully withstands being submerged in water from December-through-March and produces loads of acorns that drop during the starvation months of the year.  It is also (supposedly) cold hardy as far north as Madison, Wisconsin.

Like most fast growing trees, it tends to have widely spaced limbs which are not optimal for breaking the wind.  That shortcoming is ameliorated by the tendency of oak trees, especially in their youth, to hold onto their leaves through the winter. 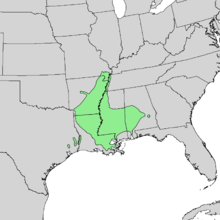 This species is not native to Michigan.  Biologists contend that Mexico is the epicenter of Quercus diversity.  The further one gets from Mexico the fewer species one encounters and the more uniform each species becomes.  According to this site, Texas has 35 species of oak compared to Michigan's 9 species.  I suspect that this species would already be in Michigan if the Mississippi river flowed south-to-north.  Since it does not, I am helping God out by using the services of the UPS.
Posted by Eaton Rapids Joe at 7:14 PM