It is that time of year.  The outside mice decide they want to be inside mice. 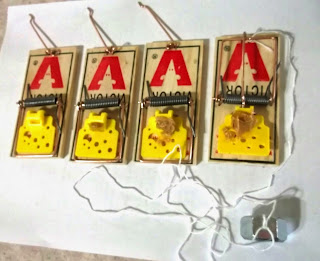 I like this style of mouse trap.  The trigger is a marvel of engineering.  It is sensitive to mice setting it off while being easy to set without it firing upon your fingers.  It can be made even more robust with regard to negligent discharge during transport by wedging a short pencil beneath the tread-plate of the trigger.

Trap as purchased on extreme left.  Ok, I lied.  I popped the staple that holds the trigger bar.

Next is a trap with a raisin wedged in the bait well.  Sophisticated city mice are capable of licking peanut butter of cheese-whiz off the trigger without setting of the trap.  The raisin makes them tug.  This step is not as important with this type of trap but essential with the older style triggers.

The fourth trap is set and has a tether and a drag weight.  Waxed dental floss makes a good tether as it holds knots well and is very strong.  I used a very large nut for the drag weight.  One downside of this type of trigger is that they sometimes fire too soon and only catch a front leg.  The animal drags off the trap, dies in some inaccessible place and starts smelling.


The goal of trap placement is to maximize the chances of catching the target species (mice) and minimize the impact on non-targets (wives, dogs, cats, etc.)

Mice like to run behind objects and beneath objects.  Do you see that piano pushed up against the wall?  Yup, place a mouse trap behind the piano.

Mice are attracted to food odor.  A mouse trap goes behind the trash receptacle in the kitchen.  It will be placed between the receptacle and the wall after I ensure that there is enough room for the bail to swing freely through its arc.

Another one goes behind the hat-and-mitten bin by one of the pet food dishes.  Like the trash receptacle this place meets the mouse's need for cover and its desire for food.

A third mouse trap goes in the pantry down in the basement.  It will be placed along the baseboard near the door.  Doorways are natural funnels and baseboards near doorways concentrate traffic.  I can enhance the traffic by pulling the portable shelving a couple of inches (50mm) away from the wall to create a secure run-way for the mice.

The fourth mouse trap goes into Kubota's room.  His room offers an abundance of both cover and food.  Fifteen year olds.  Sigh!!!
Posted by Eaton Rapids Joe at 10:43 AM