Mrs ERJ and I took a vacation this fall.  We went to southern Indiana where one can hunt ducks, geese, pheasant, woodcock and a multitude of other games species. 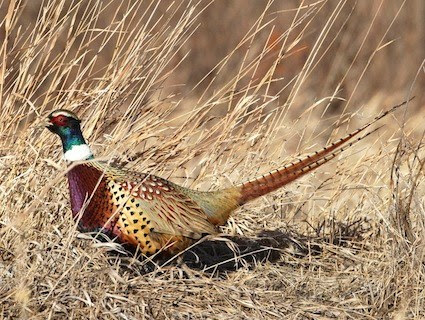 While driving around looking for a place to hunt we saw a huge flock of Ring-neck Pheasant fly across the road into a field of corn stubble.  There was a single farmhouse near by.  We pulled into the drive to ask permission to hunt.  I let Mrs ERJ do the talking.

The farmer was kind but adamant.  He said we could not hunt because he raised race horses.  The least expensive animal on his property was valued at a quarter-million dollars.  He simply could not afford the risk of gun shots spooking the animals and having them run into a fence.

Mrs ERJ can be very persuasive.  She asked if we could try to harvest them without using firearms.

The farmer was a bit taken aback.  He said it was foolishness and a waste of time but he gave us his permission...as long as we did not discharge firearms.

About ninety minutes later we were back on his front porch dragging two, large burlap bags.

Mrs ERJ told the farmer that we got carried away and went over the limit.  We wanted him to have the "extras".  She slid the heavier burlap bag inside the door.

He pulled out a bird and carefully inspected it.  There were no pellet holes.  He was amazed.  "I know that I did not hear any gunshots.  Just how did you harvest these birds?!?"

Mrs ERJ told him that we 'uglied' them to death.

"How does that work?" he asked.

"Well," said Mrs ERJ, "you know those birds will be holed up on the downwind side of corn shocks on a cold, windy day like this.  So we snuck up on those corn shock, walking downwind.  Then we jumped out and made a face like this 8>( .  It stops their heart."

The farmer was amazed.  "Wow!  I never heard of 'uglying' birds to death.  Can anybody do it?"

Mrs ERJ rather apologetically said, "Nope.  Mr ERJ cain't do it, for one."

The farmer inspected me very carefully.  From his expression, I could tell that he thought I had a GREAT deal of potential for this kind of hunting.