"Prologue:  Reading the Rooflines of Europe

The roofs of Europe, the old roofs, at least, have some interesting things to say to travelers.  The rooflines of a region can serve as a prologue to reading the local landscape.  The offer a record of how men have come to terms with rain and wind and heat and cold and, of course, other men.  Roof materials may point to local quarries or clay pits or forests or reed-fringed swamps.  Roof forms, their structure, their pitch, the overhang of their eaves, their chimneys, their very mosses add further comments, until the environment is so dependably indicated that a confirmed roof-reader may even be equipped to predict the quality of the native oak leaf: big, small, leathery, harsh, prickly, silky, thin or thick.  He may also be able to guess certain qualities of the local humans as well, including a thing or two about their gods, and their gardens.

...in Paris roofs are as divorced from the environment as city life itself.   Mansard roofs belong to the realm of style, and to the realm of the supreme stylist, Louis XIV."

The liberal male belongs to the realm of style.  He is kept, much like a fashionable breed of dog, as an indicator of social status.  The breed of the kept dog tells much of the values of the decision maker.  A Pekingese or a Pitbull?  An Airedale or a Golden Retriever?  A Pug or Great Pyrenees?  They project image and attitude like the exterior color of the dwelling and the choice of perennials in the yard.  And the dog, and the color, the perennials, and the liberal male are all expendable.  They are all ballast to be jettisoned when the balloon appears to be at risk of not clearing the power wires.

The liberal male knows this.  He has seen it happen to others.  He is bitter and impotent.  And he madly dances the rain-dance to prevent the ping-pong ball with his number on it from coming up.  He is a true believer in the metaphysics of conversion:  Perhaps the gods of chance will spare him if he cleaves to the true, liberal line and proselytizes like a mo-fo. Maybe the gods will be kind.  After all, some turkeys survive Thanksgiving.  Right?

The non-expendable male believes in Occam's razor.  Truth is not always simple, but it is still a good bet.  Many problems can be talked to death, but not all of them.  Three syllable words bounce off of and enrage that class of problems.  The only thing those problems respect is the ability to apply rapid and accurate packages of kinetic energy. 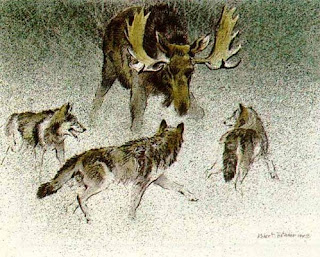 The liberal male has a highly stylized definition of the battlefield.  It includes an extended Kabuki theater of threat and escalation.  It includes certified, return-receipt letters.  It includes his attorney calling  the other attorney.

Did I mention that a human can bleed to death in 40 seconds?

The liberal male model works great until one person does not buy into the game.  And why would a barbarian with a weapon buy into a game that he cannot win.  He cannot place.  He cannot show....not if he buys into the liberal man's rules.  But he can take first, second and third place if he follows his own rules.  And he can win in 40 seconds.

I once had a conversation with an enormous, leather-tough Sicilian named Carmelo Scopazzo.  Carmelo had been a Sergeant in Vietnam. He loved to bust my chops.

I told him that I was not sure that I could ever pull the trigger on a human being.

He asked me, "Have you ever killed a deer."

He asked, "Did you follow the blood trail?  Did you slit its belly?  Did you pull the guts out?  Did you reach up, grab the wind-pipe and tear it out by force?"

He asked, "Did you need the meat?  Was your family going to go hungry if you did not bring home meat?"

He said, "Joe, I have no doubt that when some animal is about to hurt your wife, your daughter or your son that you will have NO HESITATION about doing what you need to do."

That was one of the kindest things anybody ever said to me.  It affirmed that I was a man.  No qualifiers or adjectives like 'liberal'.  Just "man".

A liberal man is expendable.  A man is not.

"Gentle people sleep peacefully at night because rough men stand in the dark, ready to do violence on their behalf."    -George Orwell, author of 1984 and Animal Farm....books that are still well worth reading.

The non-expendable man can play the Kabuki theater because he must.  But he knows that not all is theater.  A part of him waits, a predator, a protector stationed at ambush.  He is keenly attuned to the fraction of a second when the rules dissolve and cease to exist.  He is ready to escalate beyond the game-changer. He is ready to become the wolf.  The wolf does not play games.  The wolf and his pack WILL survive.
Posted by Eaton Rapids Joe at 11:35 PM