Get off the X

This post is for anybody who may find themselves in, or passing through an urban area when the Zimmerman trial results are announced.

The advice in this post is shamelessly lifted from Xavier's Thoughts.  Specifically, his posts of

Standing on the X


Selection
The criminal, once he has observed a potential victim, will send out some test runs to determine if the person is indeed prey, or predator. These tests may be asking for a match, the time, or change. The initial tests all have one thing in common. They violate boundaries, and determine if the selected person will allow their space and generosity to be violated. The predator is mimicking a common panhandler to get in close, test the waters and position himself for attack. All of these persons are easily recognized by their inappropriate behavior and boundary violations. Like the fish who fails to recognize the moray eel on the reef, the person who fumbles for change with a predator has sealed their fate. The ruses are many and varied. I have seen crackheads target tourists and ask to get their pictures taken. I have seen balloon ladies that had accomplices working in the shadows. I have seen young women toss out lewd comments as their male accomplices tried to blend into the landscape. I have seen kids sitting on trash cans in housing projects while older gang members waited around the corner. I have even seen one teen lay on the side of the road in the projects waiting for a good Samaritan as his accomplices hid behind a dumpster. Like the anglerfish, these predators actively dangle lures to allow them to catch prey. To be seen as a potentially superior predator, one must simply recognize the threat, refuse to engage, and continue without alarm.

So visualize that stock, comic gag:  Black Girl Attitude.  Hyper-sensitive. Big reaction.  LOUD. Everybody LOOK! Extravagant defense of space.  Guess what....it is not a comic gag in the scenarios described above.  It is a highly rational response to that environment.  Think about it.  Urban Black Girls are surviving in a high hazard environment so the commonalities of their behaviors (stereotyped in comedy) evolved in response to highly compelling reasons.

From Standing on The X:

There are reasons why a grammar school dropout who cannot multiply 26 by 4 is able to outwit and victimize a person who is of demonstrably higher intelligence and social proficiency.

First, the criminal does this for a living. They are not as dumb as many think they are. If you fail to respect their level of skill, you will be unprepared to deal with them. They are not dumb. They just attended a different "school" and studied a different "curriculum". To understand and predict their behavior, you must know a bit of that curriculum as well. 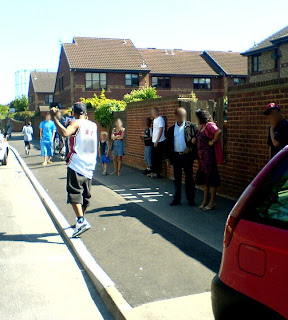 Understanding the behaviors and motivations of different types of criminals is the framework with which a wise person protects themselves. Know your enemy. Then practice avoidance if you can. If avoidance is impossible, try evasion. Try both of these tactics prior to defense. You do not have to "win" a dangerous encounter. Nobody wins a gunfight. They simply survive.

The next reason that a criminal can overcome a victim is they have a plan. They are acting offensively, while the victim is reacting defensively. By having a plan in place before contact is made, the criminal has a distinct advantage. They have considered contingencies. They know what they are going to do. They often work in numbers, confusing and surrounding the victim beforehand. They know what's coming. The victim does not. Know how the criminal works. He has a plan, and is looking for a victim to impose the plan on. The criminal has considered, and quite possibly experienced the reactions he will receive from his victim before the fact. Having a plan of action to deal with criminal activities is vital once you have been targeted. There is no one plan to fit every contingency. Having a counter plan is good, but removing yourself from the victim selection process is a far superior tactic.

The active criminal conceals their intent until they have selected a victim, moved in for the attack, and possibly made a couple of probes to assess the victim's responses...The most frequent mistake that a victim makes is the failure to recognize the threat until it is to late.

So have a plan.  Pre-plan routes that avoid hazard and choke-points.  Pre-determine the triggers.  Accept that you will be behind the curve because nobody told you the game changed.  Either be prepared to over-react if you stay in logical-rational mind or prepare to react on hunch/feeling/premonition.  Square in your mind that it is OK to miss a day of work or to leave several hours early, you can chalk it up to family issues.  The possibility of leaving orphans counts as a family issue in my book.

And to quote Remus over at the Woodpilereport, Stay Away from Crowds.  Distance is your friend.  One mile probably buys you 30 minutes....probably.   We will undoubtedly read about some idiots who leave their safe home and drive somewhere for the once-in-a-lifetime chance to score some video footage of a riot.  I may be an idiot, but I am not going to be that idiot.
Posted by Eaton Rapids Joe at 5:18 PM