What have you done for me today? 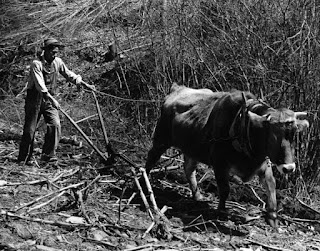 I had a boss whose standard greeting was "What have you done for me today?"

He was probably the best boss I ever had.

The ox in the picture, what do you suppose happened to him the day he could no long pull the plow? He was either sold to the glue factory or turned into hamburger.

I wonder when it will occur to the Titans of Tech that they are no different than the ox in the picture.

Maybe it is all theater. Maybe the "You did not build that" politicians are only pretending to use Zuck and the rest for punching bags.

It should be noted that the German Industrialists supported Adolph Hitler and the NAZI party because they assumed they could control Hitler, that he would be a sock puppet. They were wrong.

If history rhymes, then the government the Progressives created with all of its extra-Constitutional, competing organs will become "polycratic chaos".
Posted by Eaton Rapids Joe at 9:46 AM