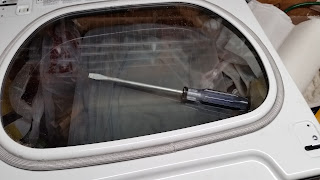 One of the temptations of blogging is to be less than honest about my screw-ups.

The clothes dryer did not stay fixed.

We bought a new one. Mrs ERJ informed me that Mother Maytag did not put the hinges on the correct side of the door for how our laundry room is arranged.

Today I fixed that problem. Twice.

I had it all put back together when I realized that I could not find the large screwdriver I used to hold the two halves of the door apart so I could file out hinge clearance in the side moldings.

Yup, sure enough. I had reassembled the door with the screwdriver between the inner and the outer. I considered leaving it in place for Mrs ERJ's amusement but decided I may need that screw driver in the near future.

A failure is just a side-excursion unless you give up. Then it is a failure.