The Shrewd King 15.2: Communication is hard

A single candle can be seen from three miles way, across a wilderness lake. It helps to have a beer-can reflector but it is not exceptional.

The lack of light pollution and the clear line-of-sight make it possible.

So it was with radio communication after Ebola. No longer were there millions of wireless devices reaching out and shaking hands. No TV stations transmitting. The only radio stations were low Wattage and had short antennas.

Dmitri was a ham radio operator. He was also a trained engineer. Dmitri could have whipped up a directional antenna by looking in handbook and cutting wires to appropriate lengths. Wires sag without support so Dmitri would have made a skeleton from PVC tubing to hold the conductors in place.

But it was just a whole lot easier to “lift” antennas and transmitter/receivers from various back-up generators.

The challenge was to find somebody to hold up the other end of the network. Gladys was over-burdened with the day-to-day CB traffic. There was no way she could monitor the “military” network 24 hours a day.

It couldn’t be just anybody.

It wasn’t the kind of job somebody could hold down in addition a regular job. Nor could it be somebody who was a heavy sleeper or somebody who regularly spent the nights with a significant-other.

Dmitri made the point that the best network in the world was useless if the information it generated is filtered to conform to a preconceived narrative or is totally ignored.

Dmitri also made the point that the worst time to plan was when the shit was hitting the fan. Radios had a place but are not an efficient way to activate the entire community. People are way from their CBs when working in the fields and they did not always respond when the radio chirped in the wee hours of the morning.

There was little point in installing sensors and tranmitters when there was no plan on the receiving end to trigger action based on the signal. 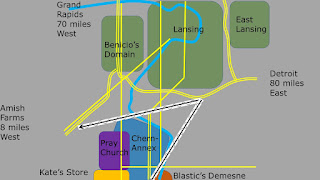 At a more practical level, the person who manned the station would have to be identified because the antennas for the sensors had to be aimed. 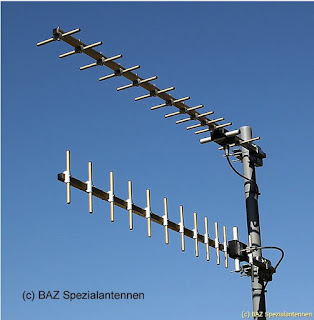 The only way Dmitri could stretch out battery life was to use very efficient, directional antennas. How efficient? The most efficient lobe was 20dB or 100 times more sensitive than the flattened side and rear lobes. The price of that efficiency was that the efficient lobe was only about 20 degrees wide. In other words, mis-aiming the antenna by more than ten degrees meant that the signal would not get through.


The other consideration was elevation, of the sending station, the receiving station and the rolling hills between the two.

The only viable candidate for the operator was Tim. Tim had been in Armor and picked up a load of shrapnel from an IED when he was riding in a Hummer in the big Sandbox. The shrapnel severed various nerves in his left leg as well as giving him dimples in many interesting places. He had been on disability before Ebola but there was nothing wrong with his ears or his tactical sense.

The only thing that made Tim the less-than-perfect choice was that he lived two-hundred yards northeast of Kate’s new store. Kate’s store had attracted raiders once and it was a prime target. There was much of reservation about putting the Capiche command-and-control center so close to a target.

In the end, Wade Hawk’s opinion carried the day. “If the raiders come to Kate’s store then her neighbors” here he jabbed his thumb toward his chest “are gonna have to pin them down until the young bucks arrive. We need to make them think they hit a hornet’s nest and convince them to keep their heads down so they don’t go poking around.”

Manuel needed to talk to Chernovsky and Gimp. Donnie insisted that they leave the bodies exactly where they were. He also insisted that Manuel not pull wallets and look for ID. Miguel stopped arguing when Donnie said he could take it up with the brass.

Chernovsky and Gimp listened to what Manuel found. Chernovsky’s glance darted to Donnie who said, “Hear him out.”

Manuel concluded with “Those people were murdered and who ever did it needs to be punished.”

“You know” Chernovsky’s voice rumbled after a few seconds of thought “we might tell you to do the same thing...kill men and women...and yes, even kids.”

“And I expect you to do it without thought or hesitation.” he finished.

“Suppose we had squatters living in a swamp a few hundred yards from your family. No big deal, right?” Chernovsky explained.

“Now suppose somebody brought Ebola to that camp. They are refugees, right, they come from everywhere. It is still out there. It is in every house where somebody died. It is on coyotes and possum and wild dogs, crows and buzzards.” Chernovsky said.

“What if they did not leave when we told them to move out? We cannot have them polluting Capiche. They cannot stay. But what if they refuse to move? Do you want them living two hundred yards from your mom and dad, your sisters, brothers and cousins?” Chernovsky said. “Do you think a dad WOULDN’T break into your house to steal blankets to warm and comfort his sick children and wife?”

“So you are saying it wasn’t murder.” Manuel said.

“No, I am not saying that. I am giving them the benefit of the doubt because I don’t have resources to deal with it. We are a thin line and you have to stay focused.” Chernovsky said.

“If you ask any of the fighters Donnie fought with, they will tell you they shot and killed men, women and teenagers. Did you ask Donnie how many people he killed without 'fair warning'?" Chernovsky asked.

"No." Manuel said with a small voice.

"Donnie, by your count, how many people did you shoot?" Chernovsky asked.

"Eighty-three or eighty-five. I sort of lost count." Donnie said.

"And you might ask Donnie to tell you about John Gault and what happened when he hesitated.” Chernovsky said.

"So you are saying there is nothing we can do." Manuel said, bitterly.

"Nope. That is not what I am saying." Chernovsky said.