At that time, Verlinden street was the western-most reach of civilization and new houses were being built east of the factory.

Harry's Place is still a family business having passed from Harry-to-Art-to Art's daughter, Harea.  It is currently the longest family-owned restaurant business in the greater Lansing area.

The first brush with insolvency was when the Durant factory closed in August, 1931; a victim of the Depression.

Things picked up when General Motors reopened the facility as a Fisher Body plant to supply bodies to Lansing's Oldsmobile division.  That happened in 1935.

Then, on May 5, 2005 General Motors closed the Lansing Body Plant.  That impacted me, personally, because I worked there at the time.

Reinventing the business
Harry's was a pretty typical "shop" bar until 2005.  The business came in surges.  The plant ran two production shifts.  Surges came every two hours at "break" and lunch time.  Then between shifts.  Then every two hours.

Nearly every customer was a regular.  They had their own "seat"  The management would set up shots and beers and a take-out bag.

A typical customer would come in, have a shot or two and a beer chaser.  He would grab his bag and step away from the bar and the next guy in line would step forward.  It was 1960 feet from the remotest corner of the Body Shop to Harry's front door.  It takes a while to get there.

The menu was simple.  Hamburgers and fries.  You could get your burger dressed up in various ways but it was still a basic 1/3 pound hamburger.  On Friday there was fried fish as well as hamburgers.

The bar was loud, and smoky and the language tended to "Shop Talk".  Patrons often substituted the word "fuck" for punctuation marks.

It was little frequented by the residents who lived nearby.  The loss of the factory across the street left Harry's without a customer base.

About The Neighborhood
The neighborhood is a patchwork quilt of smaller communities.

Significant events
One significant event was when a neighbor who lived half a block from Harry's walked into the place and ordered dinner.  Her name was Danielle.  She started chatting with Harea and noted, "This place is not so bad...but I think a lot more people would come if you started serving craft beers."  This is when the entire "craft brew" craze was starting.

After discussing it with her husband, Hugh, they spent some money they did not have and added two more taps.  At Danielle's advice they rotated through craft beers every couple of weeks.  Neighbors started coming in on a regular basis...like every couple of weeks...just to try the new craft  brews.  Since then they have added additional taps for craft brews.

Another significant event is when the State of Michigan offered incentives for employees to retire.  Harry's was very accommodating to retirement parties and it was 1.1 miles from the parking lot where most State employees parked.  While there were other bars closer to the State complex, they were more congested than Harry's 2500 square feet of dining room.  Those other bars tended to be "land-locked" with booths while most of Harry's seating consists of moveable chairs and tables.

Many of the people who first went to Harry's for a retirement party came back for lunch or brought the family for dinner.

Secondary factors
A secondary factor that helped Harry's was the State ban on smoking.  That made it easier to change the atmosphere of the "shop bar" to a "neighborhood restaurant".

The menu was upgraded.  Burgers are about 20% of the menu, now.  Ingredients are fresh.  Their Greek salad is as good, or better, any you will find elsewhere in Lansing.

Three pieces of advice (she gave me five)
I asked Harea what advice she would give a nephew or niece whose fledgling business was teetering through a near-death experience.

The biggest piece of advice was "Stop sucking cash out of your business."  Harea and Hugh went two years (mid-2005 through mid-2007) without pulling a penny from the business.  Their children worked in the restaurant without pay as well.  A subset of this is "Work with your suppliers".  Don't let your pride force you to buy more perishables than you can use.

Remain steadfast. The Great Recession hit just as they were getting their feet beneath them in 2007.  They did not breath a sigh of relief until 2010, five years after the factory closed.   At that point they were pretty sure they were going to survive.

Try new things but be quick to pull the plug when they don't pan out.  They tried live music and it simply was not a draw, at least for where they were in the process of reinventing themselves.  Booking the bands cost money and they saw no increase in business.  Music was just one of the things they tried that did not work out.

Respect the dignity of your employee when you lay them off  due to economic reasons. Let them know that it is not because of anything they did, that it is ruthless economics.  If I remember correctly, Harry's went from +20 employees down to two non-family employees.  Since the low-water mark,  many of Harry's employees have come back to work for them.

Listen to your customers and give honest consideration to every comment they make.  Danielle seemed like just another customer.   It turned out that Danielle is highly regarded in the Westside neighborhood and Danielle was delighted to spread the word about the "New" Harry's Place after they took her advice regarding craft brews.  They often took Danielle's advice on the craft brew to try next.  If it was something Danielle was interested in tasting then there were probably many other enthusiasts who were interested in tasting it as well.

In the course of talking with Harea and Hugh, I learned that they own several adjacent properties in the neighborhood.  I suppose that they purchased them with an eye toward increasing the size of their parking lot but that never happened.  They have used them as subsidized housing for waitresses and customers who have been down on their luck.  Harea noted one waiter who never learned to drive.  Providing him with housing three doors from work made it very easy for him to have perfect attendance.  Other houses have been used when domestic issues caused waitresses to be homeless. 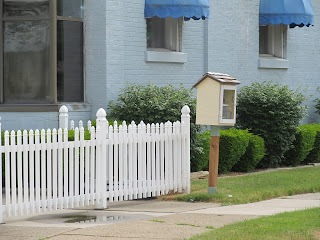 Harry's is part of the community.  They have a lending library outside their patio.

Hugh and Harea are extremely likeable people and I am very thankful that they were willing to talk with me about the challenges of their "near-death" experience.
Posted by Eaton Rapids Joe at 7:07 PM