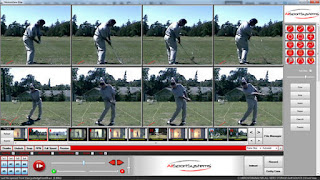 "Things are different now" is one of the great lies.  One reason it is such a fantastic lie is because it is partially true.

For example:  Many kids graduating from high school today can casually sit down with a tablet, laptop or other computer and edit video.  To them, it is not an extraordinary thing.

That is inconceivable to bosses and coaches who might be only ten years older than those students.

We are all familiar with how useful video can be when coaching things like swinging a golf club or throwing dwarves.  We are less familiar with the uses of video in industrial applications because it has rarely used.  The reasons for that rarity are rarity of equipment and rarity of editing and analysis talent. Using video, the process owner can take footage from several different angles.  The footage can be synchronized by ensuring that some definitive event like the last weld, the club impacting the golf ball or the release of the dwarf occurs at the same time on each screen.  Then, the process owner can determine if the robots really are at risk of impacting.  Sometimes a simple fix that eliminates the need for the interference zone becomes obvious, like a reorientation of one or both robots or to have one of the robots start welding from a different direction or start on a different weld.

Additionally, it becomes clear if it makes sense to program multiple interference zones.  Robot A might make two welds and then make a big move away from Robot B and make three more welds before leaving the interference zone.  It might make sense to program two interference zones in Robot B.  One stops Robot B for Robot A's first two welds but allows it to nibble its way toward Robot A after they are done.  After completing the work that is "safe" when Robot A is welding its last three welds then Robot B can pause, if necessary, until Robot A clears.

That kind of work is difficult to do in real time but a snap with videos and multiple views.  What has changed is that people who can do the video work are no longer a limiting factor.  Belladonna could do this kind of thing as a Junior in high school.

It is not uncommon to have one process or operator be significantly faster than the others.  It is easy to dismiss the faster operator as being "more athletic" but that is not always accurate.  Their speed is often an accumulation of little things:  How do they hold each part.  Orientation of the part as they approach the assembly or fixture. How they use both hands.

Happy tools
Sometimes the greater speed is because the operator is using "happy tools".  Happy tools are named after the toys that came in McDonald Happy Meals.  They are cheap, simple assembly aids.  They can include aprons or specialized tool and part holders.

The observer who is walking by the work-space is likely to miss the use of the happy tool while the person watching video can quantify exactly how much productivity gain can be attributed to the use of that tool.

A surprising number of kids graduating from high school and college can do video editting.  All you have to do is ask them.
Posted by Eaton Rapids Joe at 7:23 AM