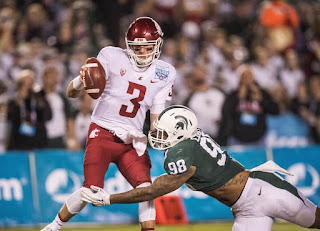 The Big Ten conference is also known as the Big Can't Count because there are 14 teams in the conference.

A single game captures a limited amount of information.  Is Michigan State REALLY that much better than Washington State?  MSU was ranked 16th and prevailed  over 18th ranked Washington State 42-17.  Probably not.  The starting quarterback for Washington State was not able to play and that makes a big difference.

However, the conference going 8-1 is notable.

Those early games capture some information of strength of the various conferences relative to each other...except most teams don't seek out the strongest opponents due to the nature of the football ratings systems. It is better to squeak by a weak opponent rather than lose by a point to a perennial powerhouse.

That is regrettable because it makes valid comparisons between conferences...difficult.

There were a few exceptions.  Ohio State played Clemson.  Michigan played FSU.  Otherwise, most of the games were "let's not get hurt" games.

This is diametrically opposed to basketball.  There are enough games in a basketball season to dilute the effects of losing to a good team.  The best programs seek out tough opponents: Any team, any place, any time.  The coaches realize that it is better to knock the cocky out of a team early in the season and rebuild rather than be invited to the big dance and take a whipping in the first round.

The nature of the problem
Suppose you were trying to predict the location of a submarine in the ocean.  You had some information regarding the path of the submarine before it submerged.  That would be analogous to the performance of the teams when they were playing non-conference opponents.

After the submarine submerges you have incomplete information.  You might have some information about where other subs are located and attempt to triangulate where the sub you are tracking is likely to be...assuming there is some relationship between the positions of the subs within a given fleet.

Bowl bids
Bowl bids seek to maximize ad revenue.  They want games that are competitive and where there are no foregone conclusions.

Each conference is "handicapped" based on national ranking and historic performance in post-season play.  Some conferences are over-achievers and others, well, they are duds.

A conference that over-performs relative to expectation might have the following characteristics: