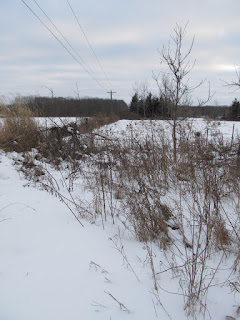 I have power wires along one side of my property.

I planted trees closer to the right-of-way than the power company prefers.  I have pears and mulberries, oak, walnut and apples infringing.

The power company hires the work done by an outside company.  This year it is Wright Tree Services.  One of their people was canvasing the neighborhood informing us that they were coming through.

Today I mixed up some fresh gas for the chainsaw and started cutting.  My hope is that they won't touch the trees that they can see I am maintaining.  In some cases it meant removing some entire varieties.  For instance, I took the top out of one pear tree that was the only place on my property where I had Ba Li


Yellow-white fleshed pear. Early to mid-September ripening in China. Chinese name Ba li hsiang li meaning Eight li fragrant pear implying that it can be detected by its odor at a distance of about 8 li, about 2 1/2 miles. December 9, 1916. (from notes on photo by Frank Meyer taken in 1916 in Arnold Arboretum photo collection).

I was fascinated by a pear that was so fragrant that it could be detected by the human nose from 2.5 miles.  Alas, it either requires a longer season to develop that fragrance than Michigan offers or my nose is not as good as a Chinaman's.  It never lived up to its hype.

I cut until the chain got dull and will hit it again on Thursday.  I will also collect scionwood of those varieties that I want to maintain.  For example, my only specimen of Walnut Hill pear is at risk:

...discovered (by Lucky Pittman) about 8 or 9 years ago on a trip home to Alabama in a rural yard on state hwy 50 in Tallapoosa County, in the Walnut Hill community, between Reeltown and Dadeville.  On January 1 it was still loaded with round, russeted pears, about 2.5-3” diameter, and a similar number on the ground underneath it.  Looked to me like it’d be a prime soft mast source for late deer season draw… I went back and asked the old black gentleman living in the house about it, but he didn’t know anything to tell, but was fine with me collecting some scions. It fruited for the first time for me here, this year… I ate a couple at Thanksgiving… full crop still hanging at that time… it’s edible, from a human standpoint, but not great; not astringent, but fairly gritty.

The upside is that I might get a few loads of wood chips delivered to my property.

So far, I think those guys at Wright Tree Service are pretty good guys.  And if they cut down my trees that are violating, they are just doing their job.