It took about $1000 but the Malibu Classic is back on the road.

We still had the battery light coming on at that point so I punted.  We took the vehicle to Wilder's Automotive in town because the most likely cause of the persistent battery light involved problems with the wiring harness.  Nothing I wanted to chase down in sub-zero weather.

Turns out the replacement alternator was defective.  It happens.

While it was at Wilder's they addressed some brake issues.  A new master cylinder, calipers....and so on.

The next morning
It did not start.

It turned over fine.  But it did not start.

This car has always been vulnerable to fuel issues.  The fuel tank is shaped like a potato chip.  It is wide and shallow.  Consequently it cools off quickly, especially when it is partially full.

I heated up the top of the engine by covering it with a blanket and running a blow drier in the "tent" for  a couple of hours.  Still no joy.  That suggested that electrical/coil issues were not likely.  The next day old Malibu fired right up when the temperature rose above 10 degrees F. 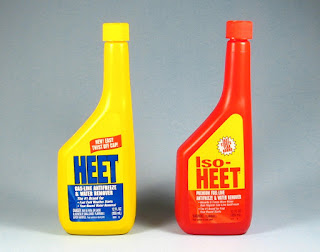 I drove it into town.  Topped off the tank and I put in a red bottle of Heet.  Then Mrs ERJ and I delivered it to Allendale, Michigan.

Exotic Failure Modes
One of the major automakers used an exotic process to encapsulate the rotor of the electric motors they used in their fuel pumps.  The pumps experienced a high level of mortality.  The engineers diagnosed the root cause as the pumps running dry.

Their "fix" involved additional parts to ensure the pump was always submersed in fuel and always had fuel to pick up.  That tripled the price of replacement parts but may have also contributed to some of my problems.

The engineers did not dead-head the fuel line at the engine.  They installed a fuel return line and had the return line dump the fuel into a "toilet bowl" that contained the pump.

Another part of the "fix" involved a sock on the fuel pick-up.  As envisioned by the designers, the sock would hang limply into the lowest part of the tank and suck up fuel even when the tank was down to vapor.  Incidentally, that extreme, lowest portion of the tank is where water/ethanol puddles up in cold weather.

One exotic failure mode involved "snow" precipitating out in the fuel.  Water/ethanol can crystallize in the form of tiny ice particles suspended in the fuel during extremely cold weather.  The snow can clog the sock and cause the engine to starve for fuel.  Stopping the engine stopa the fuel pump.  The "snow" will fall off the exterior of the sock when the sucking stops.  The driver can restart the engine and have acceptable power for another thirty miles until the sock clogs again.

Fuel systems without the sock would ingest the "snow" and it would either get stopped in the fuel filter or would "melt" when it got up to the engine and be re-incorporated with the fuel and burn.