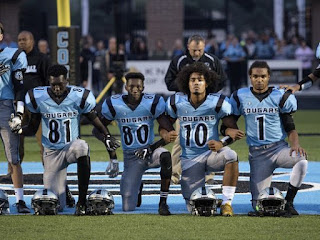 For through faith you are all children of God in Christ Jesus.  For all of you who were baptized into Christ have clothed yourselves with Christ. There is neither Jew nor Greek, there is neither slave nor free person, there is not male and female; for you are all one in Christ Jesus. And if you belong to Christ, then you are Abraham’s descendant, heirs according to the promise.  Gal 3:26-29

They were protesting how Lansing Catholic High School handled four football players who took a knee during the National Anthem before the Homecoming game with Ionia.

For whatever difference it makes, I support the process used by the Diocese of Lansing through this circus show.  They negotiated in good faith.

And, as an organization dedicated to getting people to heaven, they are keeping their eye-on-the-prize.  And the prize is not fleeting glory on the athletic field; the prize is the character (conscience) developed on those fields.

There are some things that are binary.  Are you saved or going to perdition?  Are you a Catholic (or Baptist, or Methodist or Muslim) or not?  Are you a member of this team or are you a free agent.