Atlantic salmon have a problem.

They used to spawn in nearly every large river north of Maryland.  Those large rivers have been dammed and industrialized.  They no longer support salmon runs.

Most of the remaining spawning rivers are short and their basins are characterized by soils with poor buffering capacity.  Not only that, but the native soils tend to be gravel and rock with poor water retention.

Those factors cause enormous fluctuations in flow and pH.  Both have brutal effects on young fish. 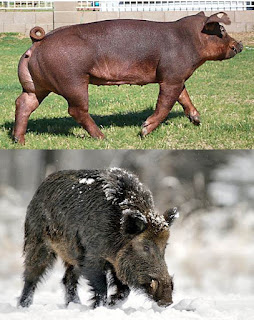 Domesticated fish escape from their cages during extreme weather events and taint the gene pool. 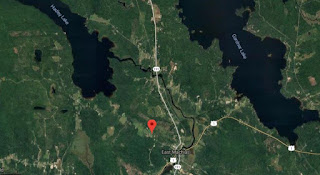 The bureaucratic approach to restoring native species is to buy "seed stock" in the most cost efficient manner possible.  Then to raise the maximum number of "seedlings" and to carpet-bomb as many potential salmon streams as possible.  The numbers look good.  They can say they released 250,000 salmon fry in 127 streams.

A manager who is more in tune with the biological realities is more likely to pick one or two small rivers as the kernel for his Genesis project.  He/she might pick rivers whose headwaters are fed by some large lakes as those lakes will buffer flow and pH excursions.  He/she will pick rivers with an existing run of salmon and use those fish as his seedstock.

He might even pick rivers that have some development along the banks.  It is a sad reality that "wilderness" rivers are not developed for a reason.  They are sterile and infertile.  Developed rivers have people who can become your best allies, especially if some of their livelihoods are dependent upon the salmon populations.

The wise manager would also invest in making the fingerlings that he releases...well...sophisticated.  It is better to release fewer, fitter fish than to release what is essentially very, ver expensive brown trout chow.

That is, the wise manager focuses on results rather than numbers that "look good". 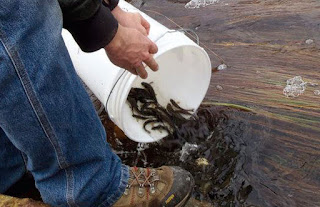 The 250,000/99.9% mortality results in 250 adults returning to 127 streams.  That is two salmon per stream.  Even if you were lucky enough to have one male and one female per stream it is doubtful that they would be able to find each other.  It might look good in the newspapers but not so good on the ground.

The 50,000/95% mortality results in 2500 adults returning to one or two streams.  The opportunities for romance and natural reproduction are much more favorable.  However, it is tough to go to the state legislature and ask for more funding for a program when it looks like you are only 20% as productive as the last guy.

The other advantage of focusing on one or two streams is that the most favorable stretches for spawning and subsequent fry development can be mapped and protected.

The second scenario is what is happening on the East Machias River in Maine.