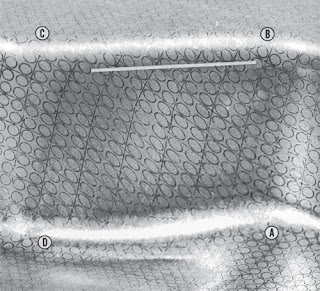 It is possible to sneak a marginal set of dies through a tryout.  The person attempting to get "buy-off" can cheat with lubrication or with a "lucky" roll of steel.  Those die sets will not be profitable in production as the stamping plant encounters random rolls of steel and does not liberally lubricate every blank with heavy grease.

Circle Grid Analysis
Circle Grid Analysis involves printing or etching a uniform array of circles on the surface of the flat steel blank before it goes through the process.  The circles are of known diameter.  After forming, the circles are distorted.  The analyst measures the two axis of the "pickles" and consults Forming Limit Diagrams for the specified material.

Three different conditions are of interest.
You might expect that the top condition, plane strain, would allow the most stretching of the sheet of steel.  You would be wrong. 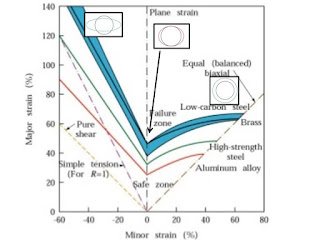 The greatest amount of stretching can be achieved with "drawing".  This is not a big surprise in retrospect. The material taken up in the stretching is fed in by the compression of the minor axis.

The big surprise is that the membrane stretching mode also allows greater total increase in the major axis than the plane strain.

It may be a bit of a stretch (pun intended) but it suggests that it is more stable to rob Peter to pay Paul than it is to pay Paul without repressing Peter.

Furthermore, it suggests that in the extreme it is more stable to rob Peter to pay Paul than to pay both Peter and Paul.

Finally, it is least stable to advantage Paul and hold Peter constant.