Demon: Thy name is Chaos


Remus over at The Woodpile Report #512 informs us that many liberals now claim that "Future Orientation" is racist.  This is not a surprise as "math", "statistics" and "compound interest" are also considered racist.

That presents a quandary:  Math, statistics, and Future Orientation are tools that are absolutely necessary for success.  The obvious conclusion is that success is racist.

I want to prod about and look at some less obvious conclusions.

Future Orientation
Gardening is a great way to become a competent planner.  Gardening forces you to think about time differently.  You have to work backwards.

You start with the goal.  Suppose you want to harvest green beans to serve with sweet corn in mid-August.  The package says that the beans are "pole beans", that they mature in 60 days and that they require warm soil to germinate.

The gardener, working backwards, realizes that "matures in 60 days" is often optimistic and refers to just the very first ripe green bean.  The gardener also realizes that he might get two weeks of picking from his beans.

He is likely to scattergun his solution.  That is, he will plant seeds 60 days, 67 days, 74 days and 81 days before his hoped-for harvest.  That would be June 16, June 9, June 2 and May 26 respectively.  That means that he should be out in the garden in early May with his rototiller.

He also needs poles which must be cut in advance.

"Why not just plant bush beans?" the reader asks.

Again, the gardener is planning ahead.  His youngest kid graduates from high school this year.  And the gardener is getting a bit big around the middle.  He would rather pick beans standing up.  See, he is thinking ahead.

Chaos
How long do you think the gardener would continue gardening if hooligans vandalized his garden at seemingly random intervals?  What if the production was purloined in the middle of the night? How long?

Not very long.  There is too much emotional investment.

Therein lies one of the root-causes of the planner/non-planner divide.

Cultures that are not run by planners are tolerant of disruptive people.  They even celebrate them...think "rappers".  These cultures often encourage disruption because disruption draws more resources. 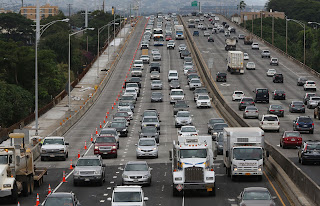 Consider the simplest of examples:  The freeway.

Freeways move millions of vehicles a day.  In general, they move those vehicles quickly and safely.  The reason they are successful is because "the rules" foster coherence and because "limited access" restricts the injection of chaos to predictable amounts and locations.  Therefore, the chaos seldom rises above levels where "the rules" can dampen it back down.

The guy who zigs-and-zags?  He is aggravating because he is breaking the rules.  He is chaos.  He makes the system more fragile.

It occurs when the youth is old enough to have some autonomy and has the intellectual powers to ask, "What happens if..."

That developmental state is mercifully short in cultures where chaos is not tolerated and where the costs incurred by the chaos are levied against the perpetrator.

That developmental state becomes the endpoint in cultures where chaos is tolerated or fostered.

Example
Baltimore schools have had attendance issues for a long time.  Basically, half of the high school students miss one or more days a week.

The study linked above lists the following "reasons". 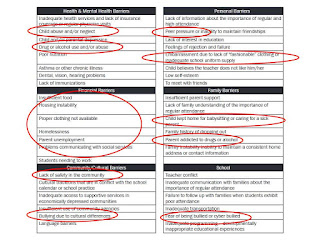 The reasons are strongly clustered around drug/alcohol abuse and its inevitable consequences (circled) with a few smaller satellites of bullying and peer pressure.

It is not racist to repudiate substance abuse and bullying.  To not repudiate them is to embrace chaos, to invite failure.
Posted by Eaton Rapids Joe at 7:41 AM