The Theory behind "Corking" Barrels

The current fashion is to free-float rifle barrels.  In general, it is a safe route to take, especially with wooden stocks that can warp and thus cause the point of impact to vary with weather.  It is also a safe route to take with the less expensive, flimsy plastic stocks that will flex when the sling is used as a shooting aid.

However, it is a well documented fact that some firearms shoot better with a slight amount of contact between the tip of of the forearm and the barrel.  In fact, some older rifles came from the factory with accommodations for creating that forearm/barrel contact.   Good article here.


This essay attempts to communicate some of the physics that might be coming into play.


Stick/slip and Slop are two very different phenomena that can vex one's efforts to obtain repeatable results.  It seems important to discuss both phenomena to ensure they are straight in the reader's mind before proceeding into the meat of the essay.


The key point is that the behavior close to the origin is linear and predictable.  There are no surprises in the at rest position.  The surprises come as load is incrementally added and an abrupt loss in load capability, relative to what is expected, occurs.  Sometimes the load capability actually diminishes as the section collapses or the material necks down or the friction goes from dry-static to dry-sliding.


Slop is nearly the opposite phenomena. 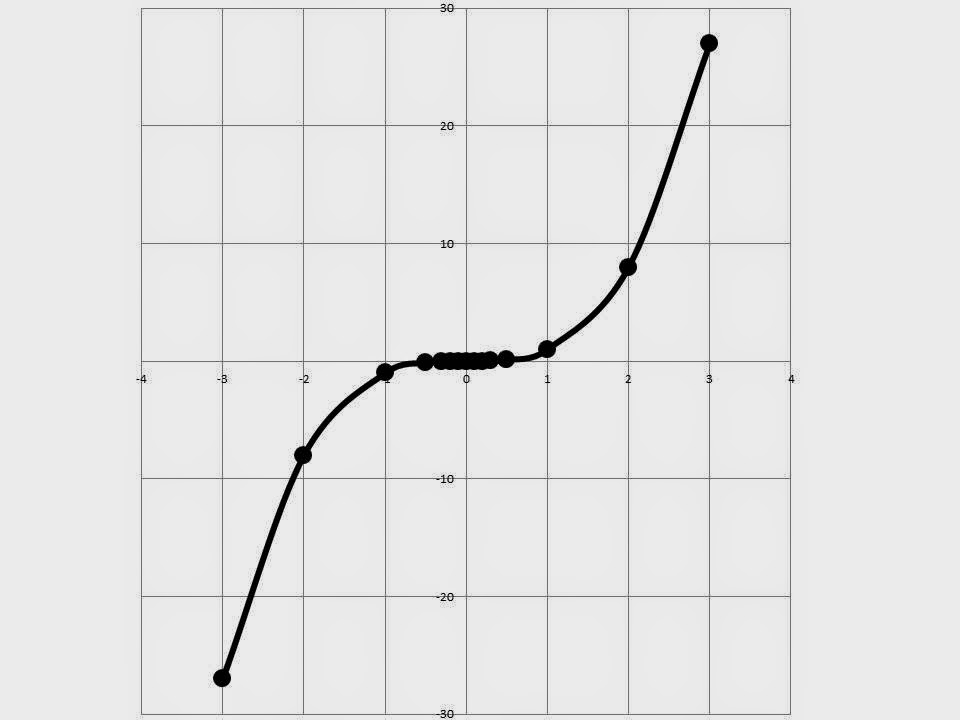 Examples of slop include that old, beat-up truck that hit too many potholes or a livestock trailer half filled with hogs.  You think the brakes are working fine until 12000 pounds of hogs crash into the front bulkhead of the trailer.


I once had a conversation with a gentleman named Young Jung Kim.  His Master's Thesis at Wayne State University involved techniques to increase machining speeds of long, slender rods.  The hypothesis was that the onset of chatter could be delayed by adding tension to the long rod.  The mental picture they had was that the frequency of violin strings goes up as tension is added.  Raising the frequency might equate to raising the rotational speed.

They were not surprised to find that the concept worked.  The big surprise occurred in the control.

They found that onset of chatter was also delayed when the rod was compressed!

Even though industrial lathes are massive, the bearings are of the highest quality and the fits between adjacent castings are infinitesimal, there are still gaps between the individual castings.  Whether the rod is tensioned or compressed, the preload rocks the parts so additional points of contact occur across the gaps between the castings and bearings.


Our rifles are similar 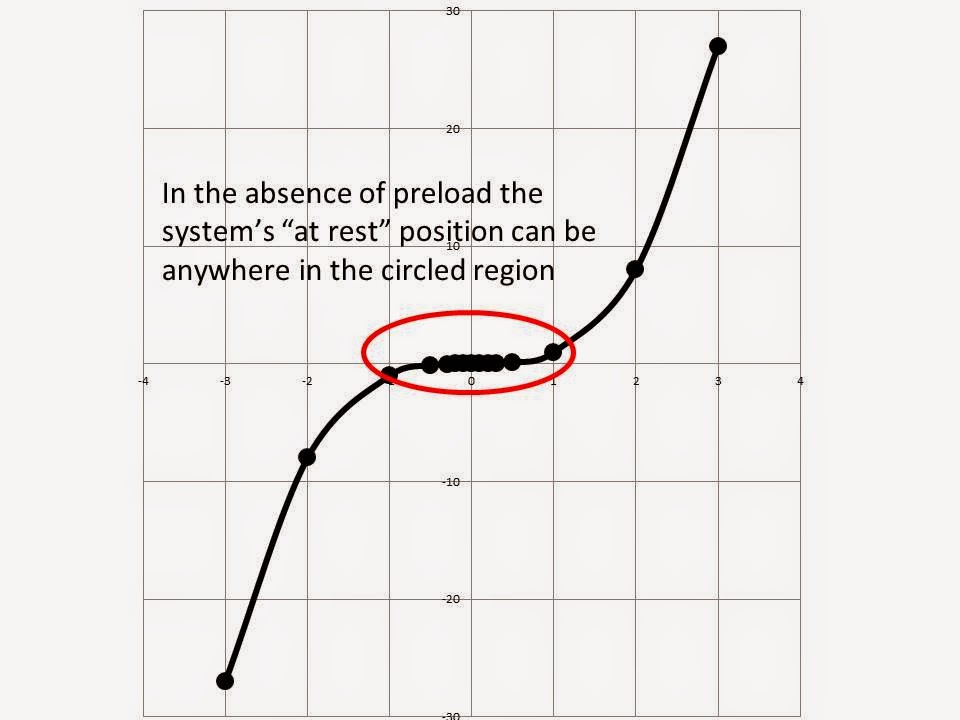 In the conceptual graphic above, the circled region is where the barreled action is likely to come to a rest within the stock after it has been fired unless it has been full-length glued in place. 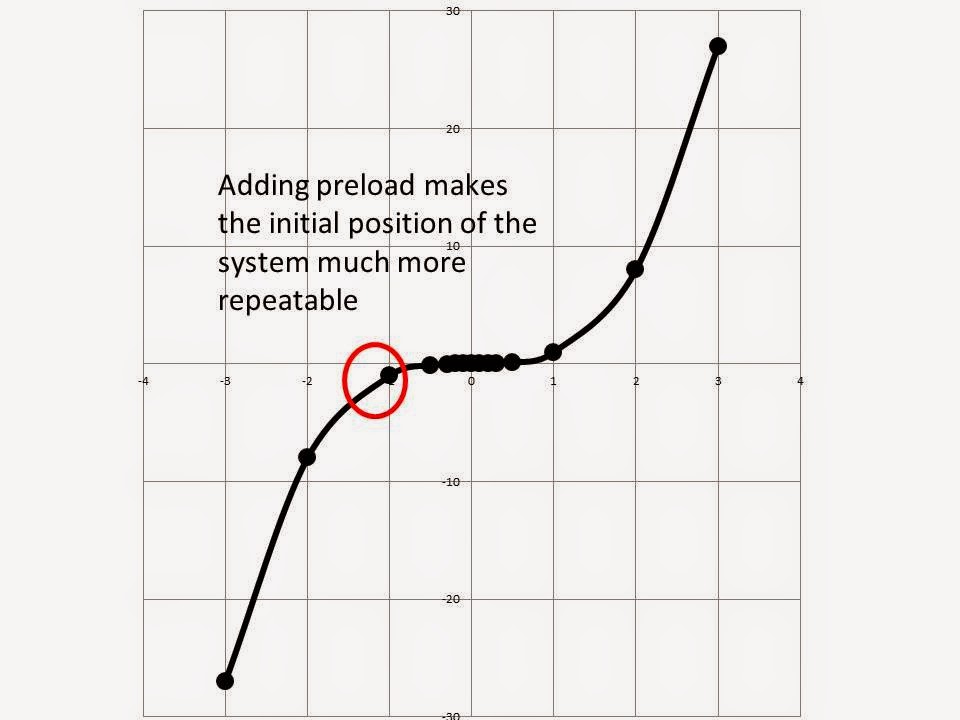 Adding preload, corking, does not change the dynamics of the joint.  Adding preload simply makes the starting point of the system more repeatable by biasing the barreled action to one side of the "slop" region.

One must take steps to avoid introducing other sensitivities when corking a barrel.  Those sensitivities are the same ones listed above, barrel warpage and deflection due to sling load.

A couple of steps can be taken to decouple the preload from those influences.  One is to limit the preload to as small of an area as possible.  Think "point contact".


Most of us don't want to drill holes in the stocks of our finest rifles, even if they are blind holes in the bottom of the barrel channel.  However, old military rifles that will be shooting a wide range of mil surplus, hand loads and cast bullet loads are fair game.  Their stocks are rarely pristine and the wide range of ammo we run through them begs for a friendly, robust platform.

The very simplest form of corking is to cut a 1/4" (6mm) wide strip of bicycle inner tubing and to lay it in the bottom of the barrel channel.  Reassemble the gun taking care to precisely torque the action screws to the specified torque and in the proper order.  Fire a couple of different loads and see if it groups the loads any closer together.  Keep notes.  Disassemble the gun, trim a little bit of length off the rubber strip.  Repeat.  If you find a sweet spot...you did great.  If you did not find a sweet spot...you had a great time shooting your relic.