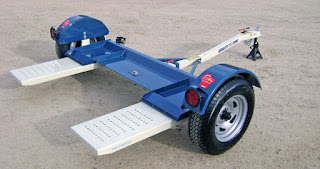 For those who are not familiar with tow dollies, there is a pivot that allows the ramps to drop. The vehicle is pushed or winched so the tires, usually the front ones, are in the wells slightly ahead of the dollies wheels. Webbing/strap is ratcheted down over the wheels to ensure they don't bounce out.

My friend's dolly was if rough shape. The tires were bald, not so much from miles but because it had been twisted out of shape and the tires toed in while one of them has about four degrees of positive camber . The wiring harness was shredded and the lamps were crushed.

The ends of the security chains had been ripped off.

My friend apologized for the shape it is in. "I loaned it to my son." was his reason.

I replaced the tires with new ST185/75R13 tires. I replaced the lights with $26 Wally-World LED lamps. I did what I could with the harness. I had some lengths of white, yellow and brown wire so I could fix one side. The other side had the wire ripped off inside the frames enclosed tubing. I need about 10 feet of green, white and brown wire to fix that and that order is in.

I cannot do anything about the wheel alignment. The wheel bearing assembliess are welded on. If they were bolted on I might be able to "cock shim" them to get them closed to aligned.

By the time the harness is fully functional and the busted ratchet straps for the wheel hold-downs are fixed I will have about $200 into his trailer. I figure that is about what I would have spent to trailer a car from the west side of Grand Rapids to Eaton Rapids. Monetarily a wash but with big credits in the karma column.

I can only imagine what happened. His son was towing something very big and very heavy and failed to secure the hitch to the towing vehicle's ball. Then, while traveling at a right, smart clip the dolly decided to go in different direction than the towing vehicle. Shortly thereafter the towing dolly and towed vehicle went elbow-over-tea kettle cross-country.

Sometimes I become discouraged when Kubota is not as careful as he might be. But then, Kubota is not 53 like my friend's son. That makes Kubota the rankest of rookies in the overall scheme of things.
Posted by Eaton Rapids Joe at 5:03 PM