Hyperinflation: What would you invest in?

This is a mental exercise and I want comments.

What would you invest in if you anticipated violent inflation? For the sake of argument, let's say your crystal ball predicts 100 percent, annual inflation in the years 2021-through-2029.

James Dakin at Bison Prepper suggests that food, the means of growing food and hand tools are good investments. I have no quibbles with Mr Dakin. He is a sharp guy and it is hard to improve on his analysis for a forty-thousand foot fly-over.

I am lopsided
Like nearly everybody else, I am stronger in some areas than others. I enjoy growing food.

I am not as strong in tools, especially the kinds of tools that were common on the farm in 1920.

What is notable about that vintage of tool is that the portions that were manufactured were very durable and the other "bits" could be fabricated on-the-farm or locally.

Consider a shovel or an ax. A farmer was unlikely to mine the iron ore, coal and limestone. Smelt the ore. Hammer out the iron and forge the ax head or business end of the shovel.

He might, however, make the three-to-twenty handles an ax or shovel might go through during its life.

Further, as the ax became blunter over the course of hundreds of re-sharpenings, the farmer might drop the head off at the local blacksmith some five miles away. The blacksmith might heat up the ax-head and draw the blade portion forward of the handle-hole further out by thinning it out. The ax then becomes a shingle ax or a roofing ax or a carpenter's ax.

The take-away of this verbal vignette is that a small forge and a wood-lathe for making handles might be a good investment.

Can you suggest others?

One of the things I learned is that it is entirely possible to convert a two-stroke, gasoline powered motor into a "uniflow" steam engine. 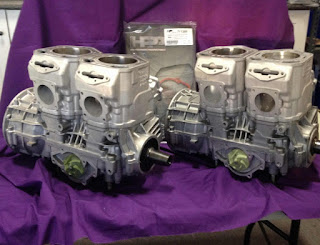 Used, 550cc, two-stroke snowmobile engines are not uncommon. It would not be technically difficult to cobble together a boiler and engine that would turn over.

The issues are two-fold:
The primary issue is, what would you use a six-hundred pound, three horse-power motor for?
The secondary issue is, what application would justify the poor thermodynamic efficiency of an engine running on 200 PSI steam?

Historically, steam engines were first used in stationary applications like pumping and as a source of industrial power where there was insufficient water-power.

The very first application was pumping water out of a coal mine. Imagine that: coal and water within yards of the application.

The second part of the problem, efficiency, is directly related to water quality.

High temperature, high pressure water is very corrosive unless it is preconditioned and highly amended with chemicals. The practical limits on a steam engine using "native" water is somewhere in the neighborhood of 200-to-300 psi and that results in thermodynamic efficiencies of 3%-to-4%.

That is not the average thermodynamic efficiency. That is the ceiling.

By comparison, a modern automotive gasoline or diesel engine has a ceiling in the 30%-to-45% range.

The advantage of a steam engine is that it can burn process waste products. It can burn sawdust or lathe turnings or dried cow poop or peat-moss or corn stalks. While those materials can provide the basic feedstock for a methane digester or gasifier and indirectly feed an internal combustion engine, there is much hardware, time and storage between the generation of the sawdust and the firing up of the engine.

Another advantage of a steam engine is that it can run without any kind of electronics. Efficiencies are lost without a PLC but it does not need integrated circuits or diodes or SCRs or coils or capacitors or spark-plugs.

As long as society can smelt or re-purpose metal/tubing capable of surviving 50psi steam and can hone a reasonably decent cylinder, they can harness steam power. The efficiency may be very poor, but it can be done.
Posted by Eaton Rapids Joe at 9:58 PM