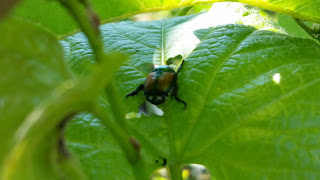 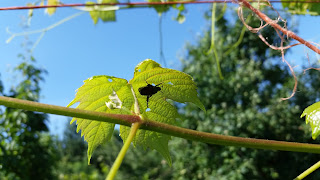 In other news, the pasture that was thoroughly beaten up by the Captain's cattle is showing some green. I had no idea that I had so many crab grass seeds in the soil's seed bank.
Believe it or not, there are named cultivars of crabgrass (Digitaria ciliaris). Red River is one such "improved" variety. It was selected in western Oklahoma and you can pay cash-money to buy crabgrass seed. Five dollars will buy a pound of Red River seed which is estimated to have 800,000 seeds. Eight dollars will buy a pound of Quick-N-Big crabgrass grass seed.

Crabgrass has some good habits. It thrives in abused sites. It is drought and heat tolerant. It sprawls and strikes roots every place a joint touches mineral dirt and a single plant can cover four square-feet within a few weeks. It self-seeds. It inhibits erosion. It contributes organic matter.

The feed value does not approach Bluegrass or Brome grass but it is much better than bare dirt.
Posted by Eaton Rapids Joe at 8:43 PM