Buttigieg slaps down a question


Buttigieg received a comment at a stump speech in Iowa. The commentor suggested that African-American people could improve their prospects by committing fewer crimes.

Buttigieg branded the commentor as racist.

Who was the racist? 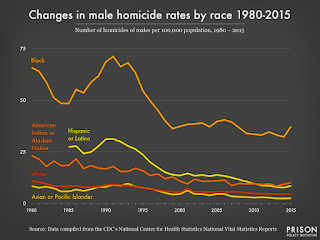 Let's look at murder. Black men are victims of homicide at a rate of 30 per 100,000. That rate is higher in some communities and lower than others.

Non-hispanic whites are victims of homicide at a rate of about 3 per 100,000.

Why focus on murder? Because it cannot be swept under the rug. A dead body is hard-wired to trigger reporting. Some, maybe even most muggings or robberies or rapes will not be reported due to fear of reprisals or community censure. The most recent data suggests that only 30% of rapes are reported to the police, for instance. Hence, any hard-eyed statistician would  agree that using the murder rates as a proxy for all violent crime is defensible.

I don't think Buttigieg is any better or worse than any other progressive. In their universe, it is a greater crime to violate P.C. norms and run the risk of making somebody "feel bad" than enabling the victimization of one race at rates six-to-ten times higher than for the dominant culture.

They lose sight of the real victims in their grandstanding on issues like incarceration rates.

A problem cannot be fixed if the folks with the wrench in their hands does not recognize it is broken.
Posted by Eaton Rapids Joe at 10:04 PM