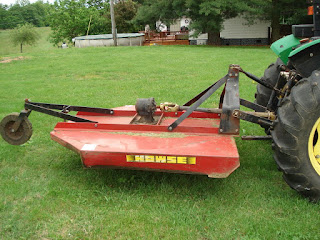 There I was, talking to the Captain. I was attempting to talk him into going with me to look at the finish mower with the broken gear/shaft.

Captain is the model for "Kelly" in the Seven Cow series. A VERY handy guy.

He asked "Why do you want to spend that kind of money for something that might work?"

Then he elaborated. He plowed snow for a gentleman in his 80s. He did it pro bono. He just happened to notice that there was a brush-hog in the weeds right next to the yard.

He asked about it at the time. The gentleman mentioned that the blades hit the housing.

The gentleman would be delighted to have the Captain look at the mower to see if he could make it work. Of course he could use the mower as long as he brought it back when he was done.

The blades were attached to a bell and the bell was bent. The blades must have hit rocks.  The Captain blocked the blade/bell assembly and used the front-end loader of his tractor to un-bend the bell. The blades no longer hit the housing.

I was surprised that the shafts and drive turned freely. Opening the angle drive case I could see the case was half full of diffy-lube. The old man had taken very good care of his equipment.

The Captain plans to mow both of our pastures with the brush hog this week. Just to ensure that it is working well before he takes it back.