A quick lesson in failures in compression
Solid materials have a property called stiffness. A material can be strong and not-stiff. An example would be surgical tubing.

Even if you had perfectly straight pieces of surgical tubing it would not be possible to build a 300 foot tall skyscraper using it as structural members because they would buckle.

Tension tends to pull material into the line of force. Materials and shapes get stronger and stiffer under tension because of that tendency to align.

Compression tends to push material out of the line of force. Consider the saying "push a rope" and that will give you a mental image of what happens.

A beam under compression resists misalignment due to the stiffness of the material and its shape.

Steel turns to bubblegum between 1100F and 1500F
Redundant design ensures that when one beam fails the load will be shifted to its neighbors. This only works if the neighboring beams are not also impaired. When the first beam failed the remaining beams failed in rapid domino fashion. 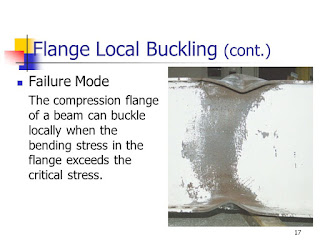 Thin walled sections "cripple" when they buckle. That is, since much of their stiffness is derived from their shape they lose even more of that stiffness as that shape is degraded.

As a guy who has done his share of structural analysis, I don't find it odd that kerosene burning at 1500 degrees destroyed the World Trade Center. After all, the vertical beams that buckled were supporting the weight of about 300 feet of building above the crash zones and a temperature of 1000F would be sufficient to take down the building even if it had been over-designed by a factor of 2.0