May the Farce be with you 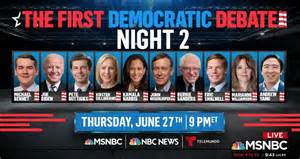 Bernie is an a angry old man who was welded into a time capsule in 1968 and decanted for comic relief. Ordinarily one would have to watch the movie Despicable Me to find characters like him. He is angry that everybody stole his unique selling proposition. He is angry because much of his support base evaporated when he "sold out" to Hillary and did not run as an independent to shake up the power structure.

Hickenlooper looked like he could have been a strong candidate but he did not present well. His handlers should return their salaries. They failed.

Kamala did not have the presence I expected. Her big moment was when she defended white people having to pay reparations because she was not allowed to play with the neighbor kids when she was eight.

Everybody interrupted and tried to be more "alpha" than the rest. NBC should have been turning off microphones.

Every candidate tried to be more pro-choice than all the others.

Ultimately it was a clown show. No way would the titans of Silicon Valley support those Bozos if they thought the candidates would deliver on the Big-Business smack-down they all promised.