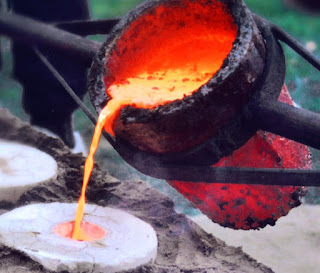 One topic that puzzles me is "How innately flexible?" are humans.

We expect former employees from waning industries to retool, retread and go back to work. How many coal miners can learn to program in Python or C++ or Linux? Can he/she learn it well enough to be hired and earn enough pay to purchase housing in California?

Main Stream Media journalists, how about them?

What Color is Your Parachute claims that most people will have seven or eight "careers" over our lifetime. Not jobs. Careers.

Change makes most people anxious and uncomfortable. I get that.

Moats
Much of our thinking is shaped by the idea of moats or barriers to entry. Did the medieval bronze-smith welcome can-do types who started casting axes and belt-buckles without going through an apprenticeship? Heck no.

Houses were burnt down, often with the family inside. Heads were cracked. People died.

The other skilled-trades supported the enforcement. Their rice bowls were also at risk.

"Credentials" are the moat that trades used to keep competition out.

Over time it became more and more difficult to obtain credentials as trades fought a battle on two fronts. One front was that technology made each trade more productive. The other front was that they wanted their child to inherit the family business.

One solution was to make the "track" to getting credentials longer and to put your child on the track as soon as possible.

In many western European countries "tracking" starts in second grade as tests are given to determine proper assignment. More tests are given over the next four years to validate the track. Then at age twelve the individual is routed into general education, college bound or forever-remedial. Extra special individuals might find themselves routed to schools that specialize in athletics where they compete in college athletic contests from age 14ish or specialize in the hard sciences.

It sucks to be a late bloomer or to be not-gifted in test taking in Europe.

It sucks to have rough social skills. Your instructors can "dump" you into a lower track if you have a bad attitude, different politics or don't grant favors.

Think I am joking? What are the odds of an outspoken conservative being able to matriculate with a Master's in Social Work in the United States?

Perhaps the biggest reason that the Deep State hates Donald Trump is because he is an outsider who crashed their party and demonstrated that their elaborate constructs are balderdash...self-serving moats. Nancy Pelosi and Chuck Schumer are fine with conservatives who worked their way up through the system. They hate Trump. Why?

Pelosi and Schumer's umbrage is no more noble than the bronze caster who burned down the home of a non-credentialed competitor.

Reset
Many of the ecological niches that have moats around them are likely to disappear if oil becomes expensive or when a pandemic hits our shores.

Survival will favor the generalist who can turn a fair hand at most endeavors and the socially adroit who can cajole others into helping them with those tasks that are beyond them.