What is a Christian?


"What is a Christian?" is worth talking about because many people have only the vaguest idea of what the "brand" stands for. That includes many people in media.

Consequently, I fear that the average kid will get a grotesque, distorted image of what a Christian is rather than one that is functional.

A similar situation confronted the early church shortly after the Roman Empire embraced Christianity as the state religion.

The church had been persecuted for the three hundred years after Christ's death and self-schooled evangelists scurried about the empire converting people. There was no formal "quality control" to ensure the "brand" resembled anything Christ taught. Consequently, the brand became vague and contradictory.

In 325 AD a bunch of shooters got together in Nicaea and hammered out "Who is in the church and who is not."

Their report-out follows. My comments are highlighted in blue.


I believe in one God,
the Father almighty,
maker of heaven and earth,
of all things visible and invisible. (Time is invisible. We believe God existed before time, created time and is not bound by the rules of time. The rules of physics, chemistry and statistic are invisible, too.)

I believe in one Lord Jesus Christ,
the Only Begotten Son of God,
born of the Father before all ages. (Jesus was floating around in the ether before he was born. He wasn't a paper plate that was picked up on the way to the picnic and then pitched in the trash after the baked beans spilled. Not a big deal) 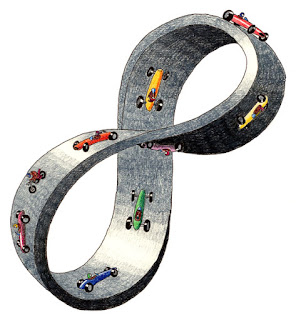 God from God, Light from Light,
true God from true God,
begotten, not made, consubstantial with the Father;
through him all things were made. (Consubstantial, what the heck does that mean? Visualize a Möbius strip or a totem pole. The Möbius strip appears to have two sides when in fact it has one continuous side. A totem pole can have multiple faces carved on it. Not two strips or two poles; one strip, one pole.)

For us men and for our salvation
he came down from heaven,
and by the Holy Spirit was incarnate of the Virgin Mary,
and became man. (Not God play-acting as man. Jesus felt the same pains and angsts we feel. Yup, even acne on Friday night)
For our sake he was crucified under Pontius Pilate,
he suffered death and was buried, (He really died. Not a coma. Not a deep, Zenlike trance. Dead)
and rose again on the third day
in accordance with the Scriptures.
He ascended into heaven
and is seated at the right hand of the Father.
He will come again in glory
to judge the living and the dead
and his kingdom will have no end. (We will be judged. His kingdom is not a fantasy du jure. We won't find our self getting a busy signal, "This business is no longer in service. Please find a new ISP.")

I believe in one, holy, catholic and apostolic Church. (Lower case "c" on the "catholic". "catholic" in the sense of a universal church. They are saying that Christ came for Jews, Greeks, Africans, Asians, Gay people, Liberals, Conservatives, MSU fans, Harvard graduates...")
I confess one Baptism for the forgiveness of sins
and I look forward to the resurrection of the dead
and the life of the world to come. Amen.

Maybe you look at the list and say, "Hey, I can work with most of that, but..." something makes you cough up a hairball. Let's assume it was the very first line.

Do you believe enough to live as if you believed? That is, can demonstrate your belief by what you say, what you do, the sites you visit or don't visit on the internet?

Our muscles have memory. In my non-professional judgement, you are "in" if you believe with your muscles even as you have doubts with your neurons.

Push-back
The most common push-back I get, usually from younger people, is "I don't understand it."

I heard it enough times that I now have a response.

Usually they will pull it out of their pocket (if it is not already in their hand) and say "Duh!"

They look at me like I am an idiot. "Well, of course it works." they say.

"What grade did you get in Fields and Waves?" I ask.

I get a strange look.

"So you are telling me that you use your smart phone even though you cannot quantitatively explain how the patch antenna works." I paraphrase.

"Do you cross a bridge any time during your typical day?" I ask.

"Sure. Probably a dozen of them." they respond.

"Have you drawn a free-body-diagram for every pin? Can you tell me the tensile stresses in every piece of steel re-bar? Can you explain the chemistry of the adhesion between the concrete and the steel?" I ask.

"Because I can talk to people I cannot see." they say.

"Why do you trust enough to drive across bridges." I ask.

"So you don't know diddly-squat about how smart phones or bridges work but you are willing to use them because you can talk to people you cannot see and because you have proof they are strong enough." I say.

"Yup. That is about right." they say.

"Those are my same arguments for praying and trusting in God."
Posted by Eaton Rapids Joe at 8:58 AM