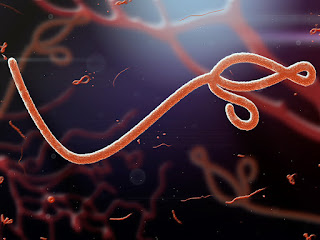 The longer we look at Ebola the worse it looks.

The periods where patients are infectious is getting longer. Lab studies show detectable levels of virus X days before visible symptoms. X gets longer every week.

Why is there anybody left alive in Africa?

Africa is very welcoming to a virus like Ebola. For one thing it targets elements of the immune system early in its life-cycle.

Said another way, people who have extremely robust immune systems, in the sense that they are constantly exposed to filthy environments and their system is chock full of monocytes, leukocytes, blah, blah, blah, are PERFECT hosts for Ebola.

I just described most of Africa.

My question, "Why is there anybody left alive in Africa?" challenges that virus levels that are detectable in the lab are not always identical to "Presents a statistically significant threat in the Real World."

Looking again at Africa, the World Health Organization reports that between 20% and 80% of young people in third world countries have serious skin diseases, everything from bug bites to impetigo.

How about population density?  Large cities in Africa seem to average about 20,000 people per square mile. How does that square with American cities?

Chicago has 12,000 people per square mile. Houston has 4000, NYC has 28,000 but spread over more floors than Africa where one story buildings are the norm.

Yup, Ebola is bad, nasty stuff. It is easy to get and kills you dead.

I also want to note that the Seven Cow stories are fiction. I will try to keep it Real World but will take a few liberties. See a doctor if you want real medical advice.

***Note regarding cities where large percentages of the population live in five story, and taller, buildings.

Elevators become epidemiological nightmares. Everybody uses them multiple times a day in the tall-building environment. Unless the elevator has voice activated commands, most people are guaranteed to touch parts of the interior.

Cities in Israel have programmable elevators that stop at every floor on the Sabbath. That way Orthodox Jews do not have to "work" at pushing buttons.

If lethal, infectious, viral diseases became a viable threat, programming a "purge cycle" on every elevator would become highly viable. Every time the elevator hits the lobby or ground floor the program would not allow it to move unti everybody exited. Then the elevator would close the doors and blast the interior with super-nova levels of UV light.

The elevator could then reopen for business until the next purge cycle.
***
Posted by Eaton Rapids Joe at 6:38 AM