The olive baboon is the most widely distributed primate in Kenya as it occupies the greatest range of habitat types. ... Here, east of Lake Turkana, the average annual rainfall is less than 200 mm and it may not rain for several years.  (200 mm is about 8")

Doum palm (Hyphaene thebaica), are one of the tallest (up to 15 m) and most common (and often dominant) tree species on the banks of Kenya’s luggas, rivers and oases. The fruit is large, often abundant, and has a water content of >24%. The shoots of the germinated seeds are eaten by people, baboons and other species. We have encountered baboons feeding on doum palm fruits at many sites throughout the lower, drier regions of Kenya.

That night we camped within a grove of doum palms…which is always ‘interesting’. All past experience tells us that doum palms should be avoided if one wishes to get a good night’s sleep.

The doum palm (Hyphaene thebaica) appears to be a keystone tree species for many mammals in northern Kenya, providing food, water, shade, and refuge. Notice the abundant, large, fruits and the dense cover provided by the leaves.  Source


Doum palm is only listed as being hardy to 20F, that is, USDA Zone 9.

There are some reasons to test that limit.

Palm trunks are often stripped of leaves. The leaves are used for fiber and building materials. It also leaves the trunks vulnerable to temperature fluctuations. 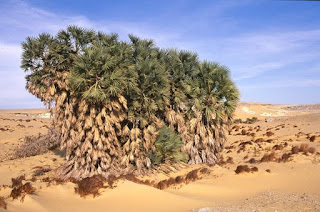 Where Hyphaene thebaica leaves are not harvested for building materials, the leaves are persistent and form a shaggy barrier around the trunk. If the low temperature excursions are of short duration, that is for a few hours before dawn, then the trunk will be protected and will not experience the radiant heat losses a naked trunk must endure.

Another reason to test the conventional wisdom regarding the minimum temperature Hyphaene thebaica can endure is the fact that the species is amenable to coppicing. That means that it eagerly sprouts from latent buds at the base of the trunk or from root suckers.

Saw Palmetto (Serenoa repens) which has been documented as recovering from -10F shares the characteristic of suckering from the base or roots. It is most useful as a fire regime adaptation but is also very useful for recovering from freeze damage.


There is a tremendous amount of Zone 8 west of the 100th Meridian where Doum Palm MIGHT thrive.