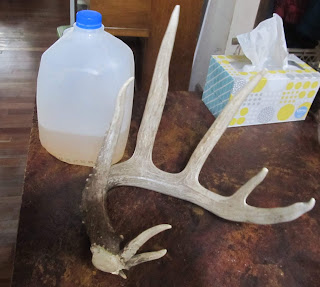 Big D, one of Kubota's friends was visiting yesterday.

I commented, "That was a great looking rack you had sitting in your truck the other day."

Big D furrowed his brows in concentration. "What day was that?"

"I don't know. Monday?" I ventured trying to remember the last time I saw him drive his truck down the road. "Why would that matter?"

"Because I am currently dating three different women." Big D said. "I wasn't sure which one you were talking about."

I think he was joking with me.

I was able to clarify that I meant the deer antlers that were piling up on the dash of his truck. Big D likes looking for sheds.

He brought one of the sheds into the house to show off. No trick photography here. The shed is touching the milk jug. I hope that big boy made lots of babies. 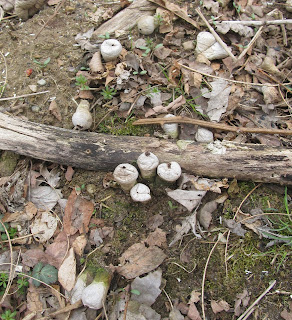 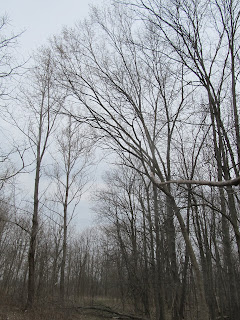 More tree planting. I think I am done with the apple and pear trees at Salamander's farm for this year. I got sixty in the "serious" orchard and forty planted out in the pucker-brush to attract deer.


I sometimes get questions about the lay of the land. This is a topo of the same parcel shown immediately above. The dark red, horizontal parcel line runs through the red, dill pickle where I am planting the trees.

Trees on seedlings of P. calleryana have shown about as much decline as trees on Winter Nelis seedling and somewhat less decline than trees on Bartlett seedling. P. calleryana is not sufficiently winter hardy for use in areas where winter injury has been a problem. Trees on P. calleryana are vigorous, but in contrast to most vigorous stocks, they begin bearing at an early age. The mature trees are slightly smaller than those on P. com-munis seedling. P. calleryana is resistant to oak root fungus, Phytophthora root rot, and crown gall. It also tolerates wet soil better than other stocks. It is subject, to lime-induced chlorosis. Seedling P. calleryana is often the best choice of seedling rootstock for any pear variety but particularly for Cornice, Bosc, and Seckel.   -Source

I had a little bit of time so I grafted a few of the pear rootstock. My original plan was to plant them and let them establish a year before grafting. I chose Harrow Sweet and Olympic, aka Korean Giant aka Dan Bae. In general, the more aliases a cultivar has the better it is.