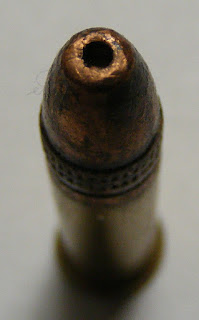 I was touring a site that will be featured in some future installments in the Skinny Cows series. I had a subject matter expert with me and he challenged me on the utility of the lowly .22LR.

Trajectory
"Point Blank Range" is the maximum distance the shooter can hold in the center of the intended target and still hit it.

Two things come into play, how 'flat' the arc of the trajectory is and the vertical height of the target.

When talking about the .22LR, everybody assumes you are using it for small game. That is, you plan to shoot squirrels and rabbits in the head.


What if you are shooting zombies and can only take brain shots. That presumes a four inch vertical target.

For those who are very new to this game, one does nothing to the rifle, one adjusts the scope to change the line-of-sight.

What if your species of zombie has a vertical target height of 24 inches, which coincidentally is exactly the distance between the top of the pubic tubercle and the bottom of the clavical of a 50th percentile, American male.

The risk is that the zombies might charge the shooters. That is a problem if the zombies are smart enough to advance in rushes and drop prone when not advancing.

If they are naive enough to remain standing during the entire rush, the shooter can engage them the entire distance as the max rise is ten inches.

Another consideration is the septic nature of .22LR projectiles.

Look at that hollowpoint. That shouts of belly-button fuzz. These bullets typically get carried around in pockets. Many of them are lubricated with wax. The wax or the hollowpoint get contaminated by whatever type of dust is in the pocket.

This particular round is copper plated. Click on the picture to embiggen and look at how rough and flaky the surface is. Look at how jagged and rough the edge of the cavity in the nose is. You can even see a small hair captured on the left side of the bullet. That was not planned.

That may not be a big deal now, but think of a world where contact with dirt and pig feces is common. A world where soap is expensive, hot water is rare and where penicillin is non-existent.

That world is the one where getting hit by even a lowly .22LR is a death sentence. Death may not come quickly. Many historical accounts tell  us that many duelers lived for three days-to-three weeks after being shot. But long term survival of those who experience a deep wound will be rare.