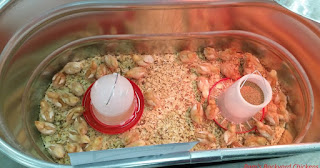 There are two farm stores in Charlotte.

They both have chicks.

This seems like good time to talk about optimum light for chicks and chickens.


Research on broilers has shown that blue and green LED lights enhance growth4. Research on layer pullets indicates that LED lights with a greater portion of blue and green spectra result in better body weights and uniformity compared to incandescent bulbs, although more data is needed (Settar, unpublished data).


In poultry, red light is vital for stimulating sexual maturity and egg production. Birds exposed to red light versus blue, green or white light consistently have higher egg production than the other color groups. Red light is able to penetrate the skull to stimulate the extra retinal photoreceptors. Red light (around 650 nm) penetrates the skull and brain (hypothalamus) four to 50 times more efficiently than blue, green and yellow-orange light2. The hypothalmus is important in regulating the production of hormones important for egg production.

Light intensity, measured in lux, clux or foot candles, is also important for poultry production. In general, light intensity below 5 lux is too dark to stimulate proper growth and production, while higher light intensity (above 50 lux) may cause nervousness and aberrant behavior. The standard recommendation for growing pullets is to brood for 2 to 3 weeks at 30–50 lux, and then dim to 10–15 lux until 14 weeks. Two weeks prior to the transfer, gradually increase the light intensity to match the levels in the layer house. Laying hens should be kept at an average of 30 lux at the level of the feed trough.  Source


The hot ticket is to raise the chicks under a heat lamp + 5000K LED lighting for three weeks. Then turn off the heat lamp. At 14 weeks have a 2700K LED light that you turn on in addition to the 5000K that you have been running the entire time. Start with the 2700K lamp three times farther away than the 5000K lamp and move it closer over the course of the next two weeks so they are equidistant at 16 weeks.

Posted by Eaton Rapids Joe at 8:30 AM