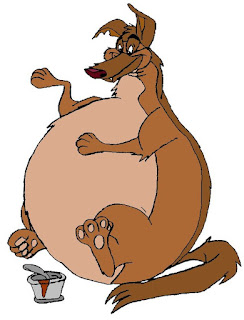 We are replicating B.F. Skinner's experiment where he used random rewards as a "control" for an experiment.

The issue of a "control" for an experiment in behaviors is not trivial. At one point he explored simply dropping food pellets down the chute in a random manner...should be a GREAT control for the rest of the experiment, right?

A problem arose. Some of the birds developed bizzare behaviors like hopping up-and-down on their left foot or spinning counterclockwise or assuming fantastical positions like the 17th image on page 31 of the Kama Sutra.

The ERJ experiment
The experiment did not start as an experiment. Rather, it started as three people with differing standards of what a "healthy" dog looked like.

I think healthy, domestic dogs should look like wild dogs with a few exceptions. Those exceptions are muscle-bound dogs like pit-bulls and such.

At the other end of the spectrum is Kubota who thinks dogs should be well padded as shown in the top image.

Mrs ERJ is in the middle. The dog's look at her with puppy eyes and tug at the ever beautiful and compassionate Mrs ERJ's heart strings and she gives them a treat. Did I mention Mrs ERJ grew up with spaniels. You would have thought she would be immune.

Cause-effect-cause.....
The rub is that the dogs ARE a little bit hungry twelve hours after they are fed.

Kubota gives them treats when he notices them but continues about his business when he doesn't.

The dogs learned how to be pests in lickity-split time: Prancing, dancing, weaving between your feet as you walk, flipping over the laptop with their noses, logging into Mrs ERJ's social media account and telling stories that are total fabrications.

In society
I wonder how many of the "brilliant", remake-the-world socialists ever owned a dog? Not just owned a dog on paper but cared for it and trained it and lived with the results?

I would guess that very few have. They would be wiser and their ideas would be more grounded in reality and less rooted in fantasy and ideology.

*Yes, I know they were pigeons but my fingers wanted to type "chickens".