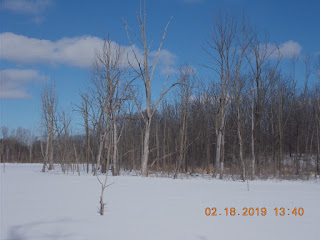 Today's adventure was to go tresspassin' with the Captain.

First we went over to his dad's. He plowed snow and I shoveled.

Then we went over to a place he used to hunt when he was a young man.

The drainage patterns changed due to land-use issues and construction. This area is very, very flat and six inch clod in a drainage ditch will cause ten acres of land to flood.

Consequently, there were many, many dead trees. 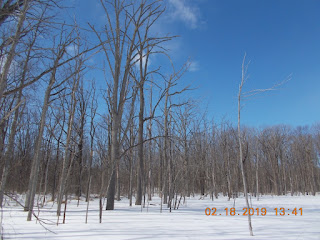 I am not being judgemental. Nature is always in a flux. The ten acres of drowned trees are counter-balanced by the fact that somewhere there are ten acres now dry enough to grow trees.

The fact that disturbances like flooding and fire create a mosaic that is actually GOOD for biodiversity is lost on most people. But then, most people are "feelers" rather than "observe and thinkers". 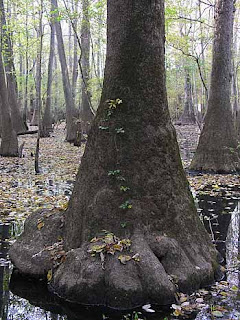 I think those newly flooded areas might be a good place to sneak some Nyssa aquatic seedlings.

What is a native species?
If climate wobbles, then why would anybody expect the "range" of any species to stay constant?

Rottweil, Germany was a desert several million years ago and before that it was warm shallow seas. Would a purist demand that all currently native, temperate mesic habitat species be destroyed because they were not consistent with what once grew there at arbitrary points in time? Would those purists be willing to move back to western Kenya?

More trees
Later, the Captain and I toured a plot closer to home.

This was also very low land. 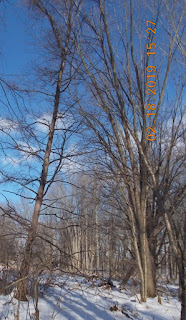 What was notable about this parcel was the tamarack (larch) and its fine timber form. The tree that is on the left side of the photo and is leaning is one of those trees. It has a very nice stem, for the species. 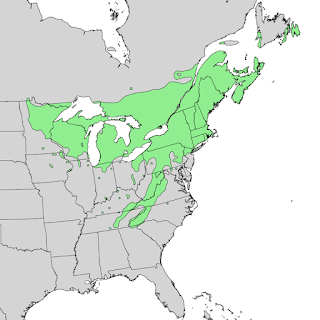 Also notable was the abundance of Yellow Birch (Betula alleghaniensis). Southern Michigan is close to the southern limit of this species. It reaches farther south along the Appalachian Mountains but that is a special circumstance 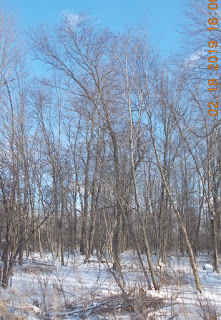 There was an west-to-east streak where the majority of the trees were Yellow Birch and the Captain commented on the rarity of the tree and the oddness of the streak.

It is rare that I can contribute to the Captain's knowledge of the out-of-doors.

Birch is a pioneer species that is very intolerant of shade, especially as a seedling. The seeds are small and don't have much get-up-and-go. Consequently, they depend on fire to wipe out taller plants that would shade them or prevent the seeds from coming in contact with the soil.

That is the competitive advantage of small seeded trees. They produce brazillions of seeds that the wind carries long distances. When a burn occurs, whether by the hand of man or by lightening, those species can reach out and colonize those burned areas.

I suggested to the Captain that the west-to-east orientation of the stand was evidence of a fire that started and the prevailing westward winds created a long, slender burn. I also stripped a twig from a low branch and was able to detect the faint odor of wintergreen, i.e. methyl-salicate. This is the first time I had been able to smell the wintergreen.

As I get older I see that humans get trapped by their narrow sense of "normality". They think that their experiences are the "correct" boundaries for what is right.

The conundrum is that nature resents running-in-place. How do you trap a pioneer species in amber? Pioneer species are totally dependent on disturbance.


In the spectrum between control freak who worship an arbitrary snapshot of succession and Laissez-faire management philosophies, I lean past Fairly-Lazy and support the active injection of disruption and intelligent chaos.
Posted by Eaton Rapids Joe at 11:49 PM