How do you measure biodiversity? 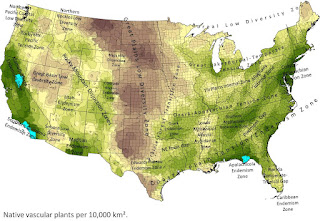 A friend sent me this image that purports to show the number of "vascular plant species per 10,000km". The automatic assumption is that this is a map is a reasonable proxy for biodiversity.

Looking at this map, I am suspicious based on the poverty of biodiversity in Florida and Texas. That just doesn't seem right.

Doing a reverse image look-up yields a website that also lists the number of genus and families per unit area. 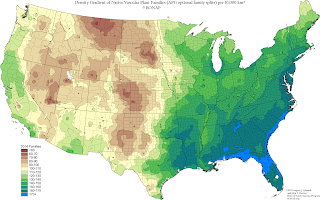 Families are one more step up the hierarchy.

It is not difficult find enough variation in a widespread population to justify a "new" species. In fact, it was rumored that two botanists "created" two new species of Hawthorn from the same specimen based on the location they were examining. Shade leaves vs. sun leaves and rainy year vs. sunny year will cause significant differences of appearance in many plants.

It is a much, much bigger deal to "discover" a new genus and it generates a serious amount of scrutiny.

Look at coastal Georgia and Carolinas (current borne species), eastern Texas (flowing out of Central America), central Florida (confluence of sub-tropical and continental) and southeastern Arizona (same as eastern Tx). That is where the rubber hits the road for botanical biodiversity, not California and Calvert, Anne Arundel and Prince George's counties Md.

A tip of the fedora to Lucas Machias.