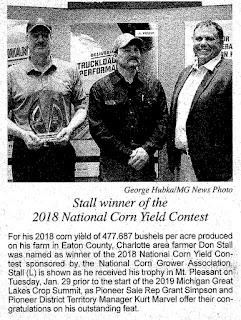 A patch of his field the size of an infield produced 5000 pounds of corn.

At three thousand Calories a day, that five thousand pounds of corn would last 9.1 years. Said another way, it would produce enough corn on a patch the size of an infield to nominally feed a family of nine for a year.


Before hybrids and chemical fertilizers a yield of 30 bushel per acre was considered par.

Even organic corn production has gone up with better hybrids and with a scientific understanding of corn's nutrient requirements. Frankly, the corn plant does not care if the nitrogen came from anhydrous ammonia, organic chicken poop or from plowed-down alfalfa.

The one thing I noticed about locally grown, organic corn is that it must be planted later if it is going to have good germination and compete with the weeds. Planted early, too much seed will rot in the ground because it is not treated with fungicides. The weeds take advantage of the sparse canopy and the fact that the organic farmer cannot spray glyphosate or pre-emergence herbicides that prevent weed seeds from germinating.