Things are pretty good around the old homestead.

I woke up to the sounds of a hoot owl outside my window this morning.

The mind plays tricks in that half-awake state called hypnagogia. Fortunately my Jedi training reminded me of the Fifth Amendment and I did not answer the question. 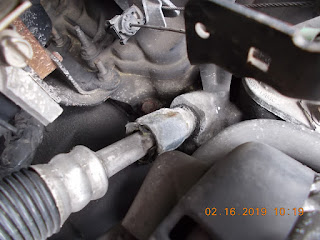 I finally got serious about trouble-shooting the source of the leak in the blue truck.

The leak sprayed coolant on the distributor and that is not a good thing.

The guy who sold me the truck claimed the leak was from the head gasket. That did not add up. For one thing a leak in the head gasket would not spray the top of the engine.

The nipple for the heater hose return looked like a promising source. The packing is pushed out. 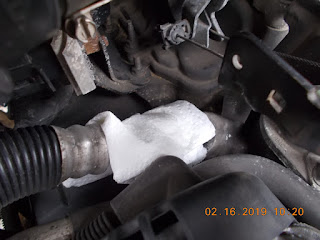 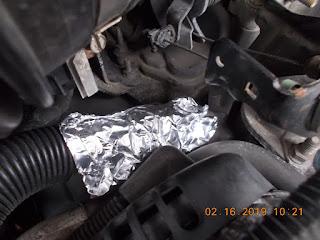 The trouble-shooting method was primitive. A wrap of paper towel and then a wrap of aluminum foil to hold the towel in place. Then I drove around.

The first clue I had that I had found the source is that the truck started time-after-time. The diagnostic equipment knocked down the spray and the distributor stayed dry.

The truck has a new nipple.

In other, breaking news: I was able to install a new front sight post and an aftermarket trigger on my friend's AR. I think it is "done".

It has been a productive few days.
Posted by Eaton Rapids Joe at 6:32 AM