Whew!  I am glad that is out of the way.

Suicide is the 800 pound gorilla in the room that nobody is talking about.

As a person who values firearms you can have all the facts on your side.  You can have impeccable logic.  You can be totally, 100% in the right....and we will still lose.

That is because nobody wants to engage in dialog about the 800 pound gorilla.

Fools rush in...
Suicides are the vast majority of firearm related deaths.  Suicide is a form of violence.  Failure to productively grapple with issues around suicide are similar to a football team with fantastic "special teams" but no offense or defense.  That team is missing the core of the game.

Perhaps the biggest reason for folk's inability to have dialog about suicide is because suicide is both intimately painful to the survivors while remaining shrouded by "privacy issues" related to the main actor(s).

One reason I remain anonymous is so I can discuss these kinds of issues.

A short history of ERJ
At one time we had a suicidal person living under our roof.

For one year we had no firearms on our property.  We had no kitchen knives or screwdrivers or hammers in the house.  All medications, yes even the ibuprofen, were locked in our bedroom.

You might suggest that nobody has ever committed suicide with a hammer.  The problem is that suicide is homicide and a person capable of suicide is also capable of murder.  While you might scoff, would you want to make that judgement and be incorrect?

Then, for a couple more years the only firearm in the house was a muzzle loader.  I was able to convince Mrs ERJ that it was "safe" by showing her all the steps required to load the device.  Then I inserted a 209 primer (used) into the primer pocket and pointed the gun at the ceiling.  The primer fell out due to the effects of gravity and an oversized primer pocket.

What was the point of aiming at the ceiling?  The only way a person can commit suicide with a long barreled firearm is to put the barrel of the gun in his mouth pointing upward and to pull the trigger with his toe.

I share this not seeking pity.  I share this information to establish my credibility.  We were there.  We did what needed to be done.

A linking of causes
I want you to give me some slack here so I can paint a background.

I propose that Suzie Soccermom's willingness to liquidate personal freedoms and the increasing rate of suicide are linked by a shared foundation.

That shared foundation is the carte blanche dismissal of Western Civilization as "irrelevant".

I see it every day in young people.  Anything new is better than everything that is old.  Cell-phones, video games...everything important.

What could be newer than the idea that just popped into my head?  That thought has to be better than what cavemen came up with.

It never occurs to our young person that every human who live beyond age 15 also shared, and dismissed, the very same thought that spontaneously bloomed in his cranium.  His 'spontaneous' thoughts are not new but as old as humanity.

Baby with the bathwater
Religion can be a 'protective factor' against suicide. 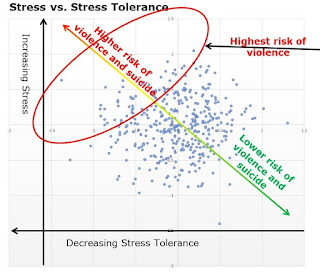 I intend to discuss those protective factors along two axis:
That is, moving the individual's trajectory so its center-of-gravity is toward the green end of the diagonal arrow.   I will speak specifically to Christianity since that is what I am most familiar with.

Religion and pianos
Suppose you had one piano and it was played, in turn, by Ludwig von Beethoven, Camille Saint-Saëns, Scott Joplin, Paul McCartney and George Winston.

Any major religion is similar.  You get totally different experiences depending on how you slice a section through the body of work.  Think of it as being photographic photo-planes if you prefer.  I will slice one such plane through Christianity.  For all of the readers who are Christians, this should be a 40,000 foot flyover.  Please don't get exercised if I leave something out or "misrepresent" a detail.  Just address it in comments.

Ironman
Suppose Iron Man (Tony Stark) flew down to an asteroid where Suzie Soccermom's 16 year old son was being held by the evil Emoticrums.  A nearby star had just supernova-ed and SS's son was about to be ionized.

Iron Man quickly removes his suit and insists SS's son wear it to escape certain death.  Iron Man, now the very mortal Tony Stark faces down the Emoticrums while SS's son escapes. It is like a cowardly fighter being given a blood transfusion with both Floyd Mayweather and Conor McGregor's blood.

What are the odds of SS's son deciding to end-it-all after watching Tony's sacrifice? Who could sanction such a colossal waste?

This is the fundamental message of Christianity.  Christ died for us.

Chalk this up as increasing stress tolerance.

Humans are social animals.  We can act in ways that cause conflict to escalate or we can act in ways that tamp-down conflict.  If you consider that the Judaic codes were forged as a small group were trapped in an elevator lost in the desert for forty years, then you start to appreciate how finely honed the codes are.

Chalk up the codes of personal conduct as "increasing stress tolerance."

Forgiveness
We swim through a sea of Secular Humanism, subjective morality and Self-Actualization.  You don't hear much about sin and forgiveness.

The scar tissue accumulates like plaque in our arteries and we become incapable of functioning.  Suicide is the ultimate expression of non-functioning.

Christianity offers a path to forgiveness.  Personally, I think we, as human organisms, need to atone and we need to hear a fellow human say the words, "You are forgiven" for us to truly feel forgiven.

Consider steps 4-through-10 of AA's Twelve Step process
Chalk this up as "decreasing stress".

(Parenthetical note:  Our suicidal resident was extremely antagonistic toward all religion.  He/she felt 'judged'.  The resident did admit to a therapist that he/she had not committed suicide because he/she believed that he/she would go to hell...that is, if there was a hell.  He/She did not want to take a chance.)

Forgiveness Part II
Christian Theology tells us that we must forgive others. That can be tough.

The advantage from a "protective factors" standpoint is that nursing grievances is toxic.  It hurts us more than it hurts the people who did us dirt.

There is a bit of nuance here.  Forgiveness does not mean passively rolling over and allowing yourself to become a victim again.  As a Christian, we have a responsibility to not lead others into temptation.  That means we must armor ourselves against future victimhood.

Chalk this up as "decreasing stress".

In the Christian Testaments, Jesus hangs out with tax collectors, hookers and fishermen.  He reminds us that God has counted every hair on our head.

Bottom line:  I have inherent value in the eyes of God even if I am a nerd, dweeb, loser, emotional, short, fat, crooked teeth, bad complexion and cannot spell.

One "theology" to be wary of is "Prosperity theology".  That particular focal plane suggests that worldly success is proof that God loves us and is based on the quote "I have come to give life and give it more abundantly."  The nasty backlash is that adherents are likely to despair when confronted by worldly setbacks.  They might see that as proof that God hates them.

Chalk this up as "decreasing stress".

If you are Suzie Soccermom and are concerned about Biff or Muffy killing his/herself then it is more productive for you to research "religion" than it is for you to attempt to eliminate guns.  And eliminate knives and screwdrivers and hammers and antifreeze and acetaminophen and rope and lamp-cords and broken glass and speeding vehicles and....

If you are in a heated debate with Suzie Soccermom regarding the Second Amendment rights, take a minute and ask her if she believes there might be a God.  If she categorically denies the possibility than you are not going to have very much luck discussing inalienable, God-given rights.

If she mumbles that she is open to the possibility that there is a God then you can broach the issue of suicide and start talking about the issue that really haunts her rather than knocking down meaningless straw-men.  Incidentally, I have a muzzle-loader for sale...

If you walked away from the church of your childhood and are concerned about suicide then you might do a little bit of research.  Various flavors of Christianity look slightly different when you concentrate on the "suicide" focal plane.  You might find some flavor of Christianity that more precisely meets your current needs than the flavor you grew up with.  Think of it as switching from McCartney to Saint-Saëns.
Posted by Eaton Rapids Joe at 7:07 PM