The tsunami of refugees crossing the Cali border into Mexico precipitated a humanitarian crisis.

The infrastructure was capable of handling ten-thousand migrants a day heading in the north-to-south direction.

It was also capable of handling the same number heading in the opposite direction.  The buses and private cars that had been empty while traveling south now had paying fares.

The system started to stagger at twenty-thousand southbound migrants a day.

It went on its knees at fifty.

Camps started to form.  Crime was rampant.  NGOs were alarmed.  There was just not enough rolling stock in the Tijuana-to-Mexico City corridore to move that number of people. There were more buses in Mexico but they were already committed to metro and inter-city routes.

That is when what was left of the United States stepped in.

The political pendulum had swung back to conservatism, partially propelled by the close proximity to the socialist Petri dish called Cali.  The Secretary of State called his counterpart in Mexico City.  “What is it going to take to move the refuges off the border?”  The question was motivated by the desire to NOT have the migrants flood Tucson, Phoenix, El Paso, Austin, Houston and points north.

The Mexican official informed the Secretary of State that the refugees had stalled out at the border because they did not have enough money to pay for transportation.

Mexicans, those living in Mexico, are among the most entrepreneurial people on earth.  Given a reasonable amount of free cash-flow they will find ways to lower cost and make the enterprise profitable.

“A hundred dollars, US, for each migrant should be enough to move them to Mexico City.”  the official estimated.

The Secretary of State was inclined to quibble, but then his elbow was jostled by an aide.  The aide handed him a note “It will cost us $100 per nose just to in-process each migrant.  Then +$600 every month.”

The Secretary of State conceded the point to the Mexican official as long as the fees were paid after the migrants arrived in Mexico City, the only city with the infrastructure to trans-ship those kinds of numbers. 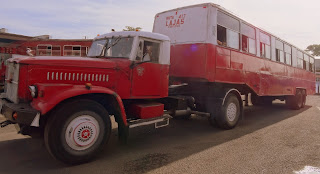 Within a day semi-trailers were being modified.  Grids of “grab bars” were being secured in place.  Some by the simple expedient of drilling holes through the sides of the trailer and sliding pipe through the holes from one side of the trailer to the other.  Holes a meter on a side were cut into the front of the trailer and vents were cut in the rear doors.  The holes in the doors were covered with steel mesh...after all, the drivers only got paid on the migrants that made it all the way to Mexico City.

Each passenger was handed two gallon jugs of water.  Mothers of infants were given webbing with snaps to clip their shawls to the grab bar.  Drivers loved babies.  They paid $100 just like adults.

The semi-tractor/trailers ran round-the-clock, refueling on the fly.  Drivers were swapped out at each end of the trip.

A typical trailer is approximately 60 square meters of floor space.  The Latin Americans fleeing Cali, by and large, were not obese.  It was not even a tight squeeze to pack two-hundred migrants into each trailer.  That is, each round trip to Mexico City grossed $20,000.  There was no shortage of truckers willing to modify their trucks and transport migrants for that kind of dough.

The trip south took 40 hours because the drivers were constrained to sixty-five kilometers per hour.  The roads were rough and the load tended to shift unpredictably.  The trip north ran deadhead and the drivers could make it in half the time.  They really put the hammer down.

The trip was made in three flights of thirteen hours each.  Each migrant exiting the bus tallied a $30 deposit in the trucker's account.  The missing $10 per nose went to mordida.