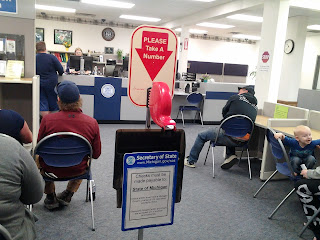 Mr Pepper's birthday is this month.  He will be turning 84.

I accompanied him to the Secretary of State's office in Hastings, Michigan.

He took two of the tickets when he entered.  He mumbled, "I know that." after I pointed it out to him.

After about forty-five minutes the clerk called his number.  He took a slight detour on the way up to the counter.  He handed his extra number to a mother with a young child who entered the facility significantly after we did.

I think the old coot planned that all along.