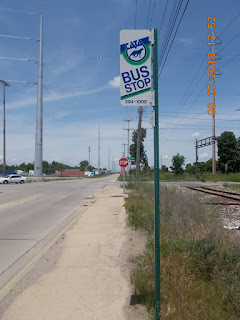 The local bus line in the Lansing, Michigan area is run by CATA, the Capital Area Transportation Authority.

I saw a good example of CATA's responsiveness yesterday.  I was crossing a bridge over the freeway in a desolate part of town when the bus in front of me stopped and let a rider off.

I thought, "What the heck!"  First of all, I was surprised that anybody would get off at the stop, then I thought it was a weird place for a stop, being in the middle of a bridge.

Then I noticed the guy was a construction worker.  He was wearing Hi-Viz clothing. 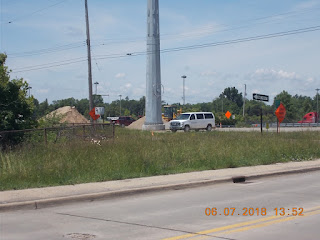 The bus stop was a temporary stop to service the temporary needs of the population.  Pretty hard to do with a rail system.

As long as CATA is being responsive... 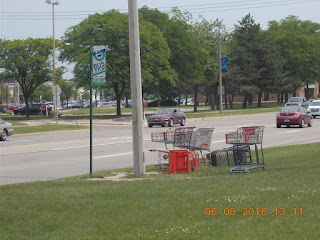 Have you ever seen anything like this?  Shopping carts piled up at a bus stop.  That is not a problem, it is information that has yet to be acted on.

Both Gordon Food Service and Big Lots! sell large volumes at at low prices.  A person cannot easily carry those amounts to the bus stop.  Consequently they wheel their purchases to the bus stop and then abandon the cart.

An enterprising executive could make a compelling case for having CATA add a bus stop closer to their store by using real data provided by counting carts.  After all, the person who used the GFS, BL and BBB carts were customers shared by both the store and CATA.

In particular, the customers who shop at Gordon Food Service must cross two very busy roads and walk a quarter mile each way and CATA could reduce that to zero streets and 500 feet.
Posted by Eaton Rapids Joe at 2:55 PM