Sighting in a handgun

A friend came over with a newly purchased handgun.

He had taken it shooting and thought it hit high and to the right.  He had been shooting at golf balls and dirt clods on a dirt berm.

Of course, he had not brought any ammo.  The first ammo we tried, a target ammo had two, back-to-back failures to extract.  Then we switched to a "High Velocity" .22 LR ammo and had much more robust extraction and ejection. 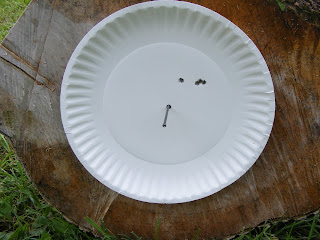 Yup.  High and to the right.  This is my shooting five shots at 10 paces, the range the "customer" does most of his tin-can shooting.  I was using the box of the pickup as a steady rest.  Good for vertical but a little embarrassing for horizontal.


There comes a point where you are chasing noise.  We could have kept fiddling with the sights for hours and my shooting would have continued to degrade over time.

And if his first shot does not anchor him, well, he has nine more for back-up.


The other thing is that he will "hit" differently than I do.  He will not be using a truck as a steady rest.  His eyes are different.  And he may find that ten paces is not where he does his precision shooting.  I didn't quibble because I believe anywhere between five paces and fifteen paces are fine distances to zero a handgun.  He is going to have to shoot the gun for a while and do any fine-tuning that is required.

According to one of the on-line ballistics calculators, given this gun and ammo (1020 out of a 5.5" barrel): For the record, my buddy did run out and buy a couple of boxes of Federal ammo, lot number 1RE082.  That should keep him shooting for a few months.
Posted by Eaton Rapids Joe at 8:52 PM